The Golden Globes have already had their category controversy this year, with a fair amount of outrage whipped up over the fact that Jordan Peele’s socially-conscious horror movie “Get Out” was submitted and accepted into the comedy categories. But with the Hollywood Foreign Press Association gearing up to announce its nominations on Monday, it’s time to stop worrying about who’s in what category and start thinking about who’s getting in and who’s getting left out.

It no longer pays to predict outrageous or embarrassing choices: In recent years, the 90-odd members of the HFPA have for the most part come up with solid nominations, though it’s clear they have to stretch to fill the comedy or musical categories most years.

This year, they have one more wrinkle to deal with in the form of the sexual-misconduct accusations that have wracked Hollywood (and the rest of the country as well). Always aware of the face they’re showing to the public on their yearly television show, Golden Globes voters may well be keen to keep any suspect figures away from the Beverly Hilton ballroom when the show takes place on Jan. 7.

If these predictions are correct, “The Shape of Water” will lead all films with six nominations. 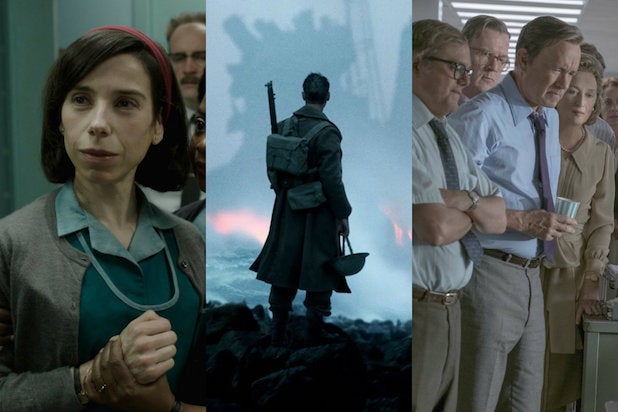 Best Motion Picture – Drama
Predictions: “Call Me by Your Name,” “Dunkirk,” “The Post,” “The Shape of Water,” “Three Billboards Outside Ebbing, Missouri”

With Oscar contenders like “Lady Bird” and “Get Out” consigned to the comedy or musical category, and “The Florida Project” perhaps too small and ragged for HFPA tastes, the final five will probably be “Call Me by Your Name,” “Dunkirk,” “The Post,” “The Shape of Water” and either “Darkest Hour” or “Three Billboards Outside Ebbing, Missouri.” Folks who know the voters think that the adventurous contingent in the HFPA loves “Three Billboards” enough to give it the edge over the safer “Darkest Hour.”

The first four are likely to be Oldman, Day-Lewis, Hanks and Chalamet. Denzel Washington has a shot for “Roman J. Israel, Esq.,” but the HFPA felt disrespected by his speech when they gave him the Cecil B. DeMille Award in 2016. That could tip the scales to Gyllenhaal, if Christian Bale doesn’t sneak in for “Hostiles.”

Again, the first four seem clear: McDormand, Hawkins, Streep and Chastain. In the fifth slot, the question is whether Woody Allen now makes voters squeamish enough that they’ll cool on longtime favorite Kate Winslet (“Wonder Wheel”) and give it to girl-power icon Gal Gadot. They might — but watch out for two HFPA faves, Jennifer Lawrence in “mother!” and Annette Bening in “Film Stars Don’t Die in Liverpool.” 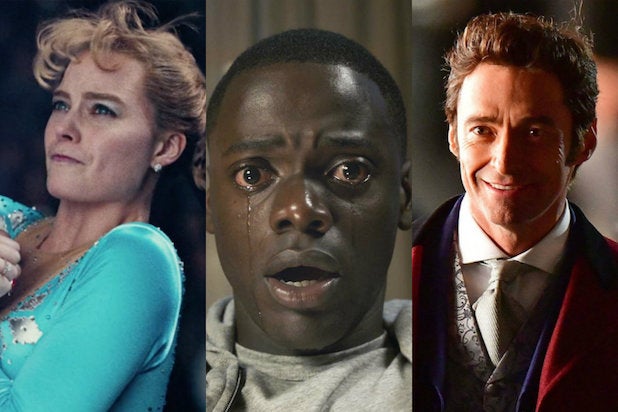 Best Motion Picture – Comedy or Musical
Predictions: “The Big Sick,” “Get Out,” “The Greatest Showman,” “I, Tonya,” “Lady Bird”

Jordan Peele didn’t make any friends in the HFPA when he appeared to complain about his social thriller “Get Out” being slotted in the comedy category, but it’s hard to imagine that voters will take it out on him and not nominate one of the year’s biggest sensations. “Lady Bird” and “I, Tonya” are locks, and “The Big Sick” isn’t far behind. But that still leaves “The Disaster Artist,” “Battle of the Sexes” and the only two real musicals in the running in a category that has the word musical in its title, “The Greatest Showman” and “Beauty and the Beast.” To prove the category warrants its name, “The Greatest Showman” should make the cut — though “Beauty and the Beast” could easily replace  it, or even push out something else and join it.

Franco, Jackman and Nanjiani for sure, with Carell just behind. Daniel Kaluuya could land the fifth slot for “Get Out” – but wherever the comedy is in that film, it’s not really in his performance. There may not be enough love for “Downsizing” for Matt Damon to slip in here, or for “The Meyerowitz Stories” for Adam Sandler to do it. Ansel Elgort would be a fine choice for “Baby Driver,” but the HFPA is said to have really loved “American Made,” and Tom Cruise would be a perfect off-the-wall Globes comedy nominee.

Also Read: Golden Globes' 11 Most Ludicrous Comedy or Musical Picks, From 'The Martian' to 'Get Out' (Photos)

Ronan, Robbie and Stone have nothing to worry about. Judi Dench, Emma Watson and Zoe Kazan (“The Big Sick”) all have shots at those final two spots, and the ability to salute an icon and give another nomination to a true musical may tip the scales in favor of the first two, though it’s a close call. 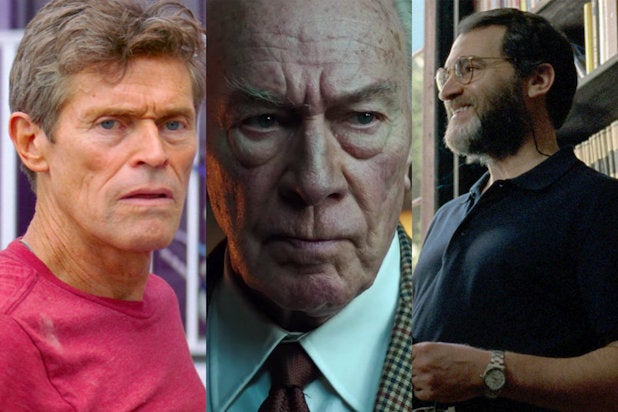 Here’s a chance to make a statement by recognizing Plummer, the guy who replaced the disgraced Kevin Spacey at the eleventh hour. (Plus they apparently responded to his performance more than anything else in the film.) Dafoe and Rockwell are sure things, with Stuhlbarg just behind. That leaves Jenkins, Armie Hammer (“Call Me by Your Name”), Mark Rylance (“Dunkirk”) and Jason Mitchell (“Mudbound”) among those competing for the last slot, with Jenkins maybe holding a slight edge.

Three of the nominees – Hunter, Metcalf and Janney – are obvious. Everybody loves Spencer, who’s got a killer scene late in “The Shape of Water” and knows what to do with it. And then there are Melissa Leo in “Novitiate,” Hong Chau in “Downsizing,” Michelle Pfeiffer in “mother!” But Blige just might have more buzz.

If Nolan, del Toro and Spielberg are inescapable and the Italian-born Guadagnino is irresistible to HFPA voters, do they pick a woman (Gerwig) or an African-American man (Jordan Peele, “Get Out”) for the last spot? They follow the headlines and choose the woman – or maybe they don’t worry about political statements, and they pick the director who didn’t embarrass them they way some think Peele did.

Martin McDonagh has a shot at getting in here for “Three Billboards,” too, as does Joe Wright for “Darkest Hour” — but in an echo of why the HFPA might be miffed at Peele these days, they probably still haven’t forgiven the way Ridley Scott (“All the Money in the World”) mocked them for accepting his film “The Martian” as a comedy. 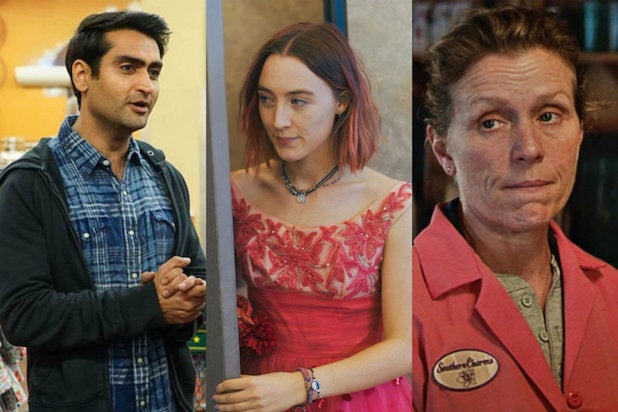 Best Screenplay
Predictions: “The Big Sick,” “Call Me by Your Name,” “Get Out,” “Lady Bird,” “Three Billboards Outside Ebbing, Missouri”

It’s hard to imagine voters bypassing “Call Me by Your Name,” “Three Billboards,” “Lady Bird” and probably “Get Out,” but will they see “The Shape of Water” as more of a visual than a verbal accomplishment? If so, “The Big Sick” could slip in. But what about the movie about journalism, “The Post?”

Globes voters tend to love John Williams, who will likely land his record 26th nomination for “The Post.” They also have a tendency to go edgy at least once a year, which could help Jonny Greenwood’s urgent score to “Phantom Thread.” “The Shape of Water” has scale and romance, “Dunkirk” scale and tension. If two World War II movies aren’t one too many, “Darkest Hour” could join the list; if they are, “Blade Runner 2049” or “Three Billboards” could do it.

Best Original Song
Predictions: “Evermore” from “Beauty and the Beast”; “Remember Me” from “Coco”; “Stand Up for Something” from “Marshall”; “This Is Me” from “The Greatest Showman”; “You Shouldn’t Look at Me That Way” from “Film Stars Don’t Die in Liverpool”

They nominated Iggy Pop in this category last year for “Gold,” bless ‘em. Could they possibly do it again for Iggy and Oneohtrix Point Never’s even better “The Pure and the Damned” from “Good Time?” Probably not. But Elvis Costello could be an attractive nominee, alongside the newest anthem from five-time nominee Diane Warren (“Stand Up for Something,” with Common) and three songs from the musical-theater world: “Remember Me” from “Frozen” songwriters Bobby and Kristin Anderson Lopez, “This Is Me” from last year’s “La La Land” winners, Broadway faves Benj Pasek and Justin Paul and “Evermore,” one of the new songs that Alan Menken wrote for the live-action “Beauty and the Beast.” If voters don’t want to get quite so theatrical, other contenders include Questlove, Mary J. Blige, Ryan Tedder and T Bone Burnett, Sara Bareilles, Nick Jonas, the late Chris Cornell and a delicious wild card, Sufjan Stevens, for his two songs from “Call Me by Your Name.”

You know that Angelina Jolie’s second foreign-language movie, “First They Killed My Father,” will get in here, just as her first one (“In the Land of Blood and Honey”) did six years ago. “The Square,” “Loveless” and “Foxtrot” are all challenging films, but they’re critical favorites that’ll make Globes voters look good. And “The Divine Order” is the entertaining film they simply loved.

Once you get past Pixar’s “Coco,” it’s a weak year for major-studio animated films; that’s why the Globes voters will probably give two of their nominations to smaller indie works, “The Breadwinner” (it’s executive produced by Angelina Jolie!) and “Loving Vincent” (it’s made up of oil paintings!). But then they’ll want to give a couple more nods to the big companies that treat them well – so “The LEGO Batman Movie” should be good for a nod, and maybe their longstanding relationship with Illumination Entertainment will give “Despicable Me 3” a slight edge over “The Boss Baby” or “Ferdinand.”