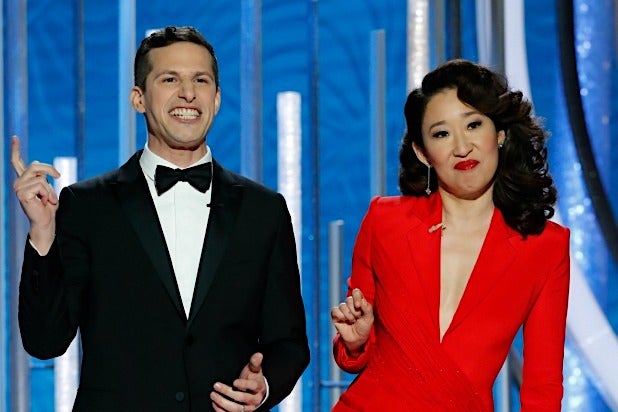 Coming off a well-received performance as presenters at the 2018 Oscars, Andy Samberg and Sandra oh returned to the awards stage on Sunday to host the 76th Golden Globe Awards.

The “Brooklyn Nine-Nine” and “Killing Eve” stars took the stage at the Beverly Hilton to open the show with a monologue that backed up their reputations as some of the nicest stars in Hollywood, and took note of the huge strides the industry has made in terms of representation and diversity.

“I said yes to the fear of being on this stage tonight to look out onto this audience and witness this moment of change,” Oh said, closing their time on stage with a particularly emotional moment. “And I’m not fooling myself. Next year could be different, but right now this moment is real. Trust me, it’s real. Because I see you, and I see you, all these faces of changes. And now, so will everyone else.”

Oh’s speech came after the duo recognized the projects like “Crazy Rich Asians,” “Black Panther,” “Blackkklansman” and FX’s “Pose” for telling stories for showcasing the voices of underrepresented people.

But throughout the monologue, Oh and Samberg also delivered a few of the traditional awards show one-liners. Here are some of the duo’s best jokes:

“We are going to have some fun, give out some awards and one lucky audience member will host the Oscars!”

“Some of you may be wondering why the two of us are hosting together.” “And the reason is, we’re the only two people left in Hollywood who haven’t gotten in trouble for saying something offensive.”

“You know what race of people really gets under my skin? The Hollywood half-marathon, because it really messes up traffic … it’s the worst race of people.”

“Ryan, were there a bunch of old members of the actual Black Panther party saying, ‘I can’t even get an audition!?’ Just kidding, they were all framed and murdered for wanting justice and equality. The world is and always has been a nightmare, it just seems worse now because of our phones.”

“A Star Is Born, starring Bradley Cooper and Lady Gaga is nominated for Best Picture, Drama … it just proves — I’m just coming up with this now — that there’s could be 100 people in the room and 99 don’t believe in you, and you just need one to believe in you.” Lady Gaga, shouting from the audience: “It’s true!”

“Crazy Rich Asians … is the first studio film with an Asian-American lead since “Ghost in the Shell” and “Aloha.”

“Before we start getting sloppy I’ve got to take care of my people before they get the Asian flush. Garcon, a round of Pepcid AC right there.” “Wait a minute, what’s the Asian flush?” “Don’t worry, this joke’s not for you.”

“Vice is an intense drama about Dick Chaney.” “But it’s actually up for Best Musical or Comedy because it erroneously invaded the wrong category based on false intelligence.”

“First Man is also how studios look for directors. “First, man. If no man available, then pair of man. Then team of man. Then eventually, maybe a woman?”

“The Marvelous Mrs. Maisel is nominated again for multiple awards.” “It’s the show that makes audiences sit up and say, wait is this antisemitic?”