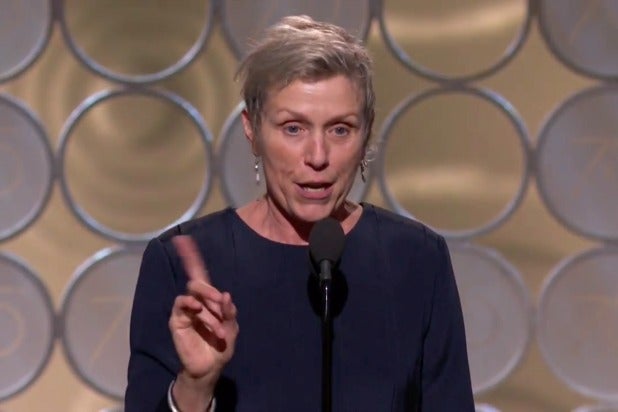 The censors at NBC didn’t have to hit the mute button all that often during Sunday’s Golden Globes ceremony, but they did end up using it three times during Frances McDormand’s acceptance speech for Best Actress in a Drama for “Three Billboards Outside Ebbing, Missouri” — none of which seemed to have actually silenced a curse word.

The first time came when she was thanking Fox Searchlight for allowing “our film to find its audience.” NBC muted McDormand when she said “Fox Searchlight,” I guess thinking she was dropping an F-bomb rather than saying the name of the studio that released the film.

The second mute came moments later when McDormand was shouting out the entire cast and crew on “Three Billboards,” saying that “everybody brought their best game to this one. Their very best game. For instance, I cannot throw a baseball for shite.”

At that point the broadcast muted McDormand, blocking the rest of the sentence, but not fast enough to censor the word that warranted it. When audio returned, she was saying “… one building to another across a two-lane street,” with viewers left to wonder what she was talking about there.

NBC later posted the speech on YouTube uncensored, and we got to hear the rest of the sentence finally: “For instance, I cannot throw a baseball for shite, but I managed to get molotov cocktails from one building to another across a two-lane street. That was really fun, but don’t try that at home.” You can view the whole speech embedded below.

Finally, McDormand addressed the political bent of the evening and the #TIMESUP movement, saying, “It was really great to be in this room tonight, and to be a part of the tectonic shift in our industry’s power structure.” NBC censored the word “shift” in that sentence, apparently thinking she was saying “s—” instead. Nice.