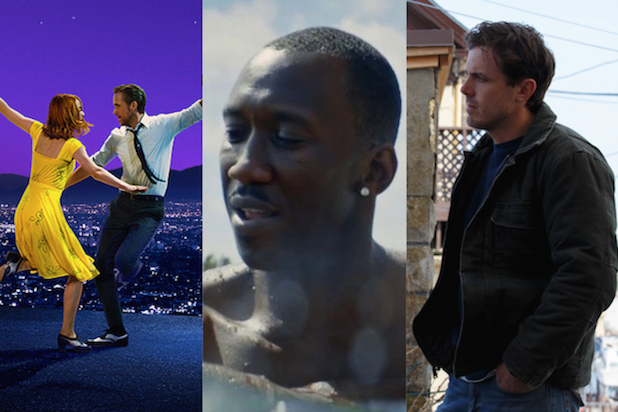 Golden Globe voters were inclusive in their nominations on Monday, but not to a record degree.

They were predictable, except when they weren’t.

They were entirely respectable, but with a few odd quirks.

And they came up with a lineup of film nominations that puts the same three films on top that have been there for most of awards season: Damien Chazelle’s dazzling musical “La La Land,” Kenneth Lonergan’s searing drama “Manchester by the Sea” and Barry Jenkins’ lyrical coming-of-age story “Moonlight.”

Those three were all nominated in the crucial picture, director and screenplay categories, and all three received multiple acting nominations as well.

And with Globe nominations coming less than 12 hours after all three films won key prizes at the Critics’ Choice Awards, it means that voters from the Hollywood Foreign Press Association for the most part did what other early voters have done in identifying the best films and performances of 2016.

Monday’s nominations don’t really tell us much about what Oscar voters will think when they get around to voting a month from now. And they aren’t likely to have much effect on those voters, except maybe to persuade a couple of them to pick up their screeners of “Nocturnal Animals” or “Captain Fantastic.”

(Unless they really haven’t been paying attention, they already know they need to see “La La Land,” “Manchester” and “Moonlight.”)

A year after the #OscarsSoWhite controversy — which came because of the Academy’s all-white slate of acting nominees, and after the Globes had nominated Will Smith and Idris Elba — Globes voters gave us six black acting nominees: Denzel Washington and Viola Davis for “Fences,” Ruth Negga for “Loving,” Mahershala Ali and Naomie Harris for “Moonlight” and Octavia Spencer for “Hidden Figures.”

If Taraji P. Henson and Janelle Monae had joined their castmate Spencer, it would have been a Globes record; as it was, the HFPA recognized a diverse year in quality movies without making a strong statement.

But they made statements in other areas, showing off the unusual favorites and occasional blind spots that the group always displays.

For instance: If you said there would be one Best Supporting Actor nominee from “Florence Foster Jenkins” and another from “Nocturnal Animals,” it’d make perfect sense that those would be Hugh Grant for “Florence” and Michael Shannon for “Nocturnal” — but instead the Globes picked Simon Helberg for the former film (a smart choice) and Aaron Taylor-Johnson for the latter (a baffling one).

They loved Tom Ford’s “Nocturnal Animals,” giving it nominations for supporting actor, screenplay and director, where Ford edged out the likes of Martin Scorsese, Clint Eastwood and Denzel Washington. But they didn’t love it quite enough to vote it into the Best Motion Picture – Drama category, making Ford the only nominated director not to see his film recognized with a best-picture nom.

(He was also the only nominated director to send each voter two bottles of his signature fragrance, though HFPA leadership asked its members to return one of the bottles.)

So now we have a Golden Globes where Martin Scorsese isn’t a nominee but Iggy Pop (best original song) is. Where Colin Farrell got into the comedy-actor category, for “The Lobster,” but Warren Beatty (“Rules Don’t Apply”) and George Clooney (“Hail, Caesar!”) didn’t. Where they passed over Tom Hanks in “Sully” so they could invite Viggo Mortensen to the party. Where the star-studded “Hail, Caesar!” and “Rules Don’t Apply” couldn’t break into the thin Best Motion Picture – Musical or Comedy category, but the delightful, tiny Irish musical “Sing Street” could.

Come to think of it, that could make for a pretty cool Golden Globes.