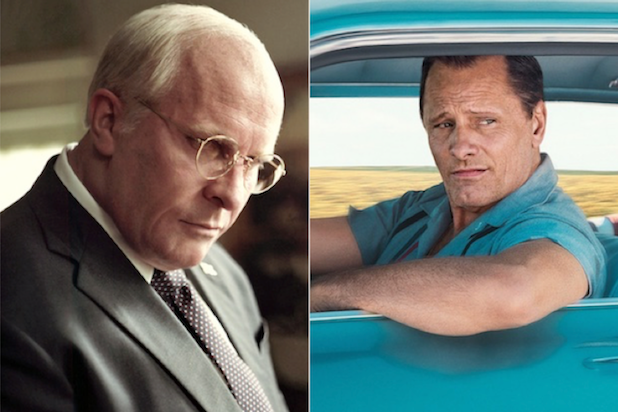 Well, that didn’t bring much clarity to the awards race. Thanks, Golden Globes.

In a year whose awards contenders come in all shapes and sizes, Globes voters took a few blockbusters, a bunch of midlevel indies and not much in the way of the small films that have enlivened some early critics’ awards.

So lots of “A Star Is Born” and “Black Panther” but no “First Reformed” or “The Rider,” not that we ever really expected the members of the Hollywood Foreign Press Association to embrace those edgy little dramas.

The nominations were a little messy and sort of scattered, and they left us with a couple of curious frontrunners in Adam McKay’s “Vice” and Peter Farrelly’s “Green Book,” the only two films to be nominated in one of the Globes’ two best picture categories as well as for director, screenplay and acting.

And although “Vice” got six nominations to five for “Green Book,” the difference between the two is negligible: The former film landed the most noms on the strength of three acting nominations rather than two, which you can’t hold against “Green Book” since it’s essentially a two-hander between Viggo Mortensen and Mahershala Ali, both of whom were nominated.

Nobody else hit the picture/directing/screenwriting/acting grand slam: “A Star Is Born” and “BlacKkKlansman” didn’t get screenplay nominations, “The Favourite” was left out of the directing category and “Roma” didn’t get an acting nom and wasn’t eligible in the Motion Picture – Drama category because it’s in a foreign language.

(It did land a nomination in the Best Motion Picture – Foreign Language category, where it should win handily in the absence of the film that was thought to be its main competitor, “Cold War.”)

The results made “A Star Is Born” the de facto frontrunner in the drama category, which everybody figured it was before the nominations were announced. And they turned the comedy/musical race into a tight one between “Vice,” “Green Book,” “The Favourite” and maybe even “Mary Poppins Returns.”

They also showed what the National Board of Review and AFI Top 10 lists already suggested – that Damien Chazelle’s Neil Armstrong story, “First Man,” which opened to rave reviews and seemed like a ready-made awards contender at the Venice Film Festival, just isn’t registering with awards voters.

And they’re not good news for Clint Eastwood’s “The Mule,” the last movie to screen for the HFPA and one that got shut out despite Eastwood’s star power and status as a Globes favorite.

Also missing in action: “Mary Queen of Scots” and “Widows,” the makers of which can join Damien, Clint, Sam Elliott, Yorgos Lanthimos and a few others in counting on the fact that the 7,000-plus Oscar voters never completely agree with the eight dozen Globes voters.

Since the Academy expanded its Best Picture category beyond five nominees in 2009, the Globes have never predicted all of their nominees. The closest came in 2013, when eight of the nine Best Picture nominees were first singled out by the Globes; the furthest away was in 2009, when only five of the 10 Oscar noms went to Globe nominees. (This year, expect them to get six to eight, depending on what the Academy thinks about “Vice” and “Mary Poppins.”)

Of course we can complain about some of the Globes’ choices and point out that the likes and dislikes of 90-odd foreign journalists don’t amount to a hill of beans in this crazy world, but what’s the point? These days, every awards show, definitely including the Academy Awards, is scrambling for ratings and star power — and if they have to sacrifice a little credibility in the process, so be it.

So it seems churlish to gripe about the respectability of the Globes after a year in which the Academy announced (and then withdrew) a new Oscar for “popular films,” and voted to move what will likely be a number of the below-the-line categories off the air. (Granted, the Globes moved those categories so far off the air that they don’t even give them out, but at this point that seems more like a matter of degree than a difference in philosophy.)

Is “Bohemian Rhapsody” a better dramatic film than, say, “First Reformed” or “First Man” or “22 July” or “Wildlife” or “Leave No Trace” or “The Front Runner” or “The Rider?” Is anything on the list a better comedy than the Coen brothers’ “The Ballad of Buster Scruggs?” I would say no, but it doesn’t matter what I say because I’m not a voter.

And I’m sure that when the Critics’ Choice Awards nominations (in which I am a voter) are announced next Monday, I’ll disagree with some of those just as strongly, and then again when Oscar nominations are announced a little less than seven weeks from now.

Different groups of people, different tastes, different priorities. And as the Academy scrambles to attract viewers and stave off irrelevancy, maybe they’re making a pretty good case that one award isn’t purer or holier than another – maybe they’re all just a matter of those tastes and those priorities, and we shouldn’t get so worked up about what they mean or the ways in which they fail to live up to our own particular tastes and priorities.

So there you go, HFPA: Good job showing us what you like. We don’t always agree, but we’ll see you on Jan. 6.