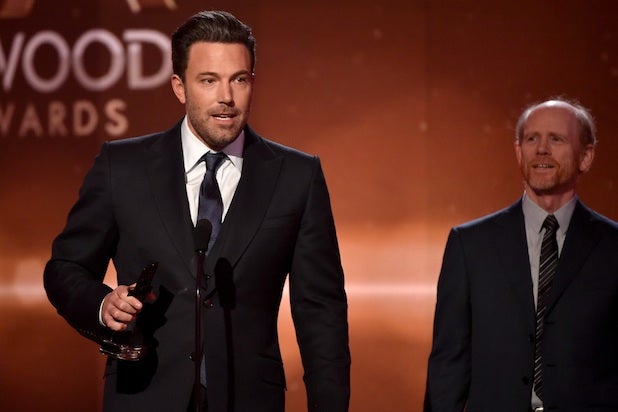 “Gone Girl” was named the top film of 2014 at Friday night’s Hollywood Film Awards, an awards show that has gone from being widely mocked inside Hollywood to landing a national television deal with CBS and Dick Clark Productions.

In other major honors, Benedict Cumberbatch took home the top actor honor for “The Imitation Game,” which won the most trophies of the evening with four. Julianne Moore won the Hollywood Actress Award for “Still Alice.” And “How to Train Your Dragon 2” won the animation award.

Unlike most awards shows, there were no losers in the crowd: The honors are negotiated ahead of time, so all the stars in attendance showed up either knowing that they were going to win an award, or knowing the person to which they’ll be presenting.

In typically curious Hollywood Film Awards fashion, some of the awards were head-scratchers: Jean-Marc Vallee, a director who had made eight films, the last of which was nominated for an Oscar for Best Picture, won the Breakthrough Director Award for “Wild,” a movie that has yet to be released. The Breakout Performance Actress Award went to Shailene Woodley, who won a number of more appropriate breakthrough awards three years and four movies ago for “The Descendants.”

The award for the year’s best documentary went to “Supermensch: The Legend of Shep Gordon,” a film about the show-business manager that has not been nominated for any of the significant doc awards this year. But the film was directed by a bigger star than any of the more celebrated non-fiction directors, actor Mike Myers, and Johnny Depp showed up to present the trophy.

The show took place at the Hollywood Palladium and was hosted by Queen Latifah.

The awards were distributed among studios and major awards contenders, with most significant films coming away with some hardware. The 18 televised categories, many of them handed out for the first time, were clearly designed to cast as wide a net as possible: They included seven different acting categories and five different best-movie categories, including film, animation, blockbuster, documentary and comedy film.

An additional nine categories were announced ahead of time and handed out off the air. They included Emmanuel Lubezki for the cinematography for “Birdman,” Alexander Desplat for the music for “The Imitation Game” and Scott Farrar for the visual effects for “Transformers: Age of Extinction.”

Also read: The Hollywood Film Awards Are Coming to TV, and We’ve Got Rude Questions

This is the first year that the awards, which were created in 1997 by Carlos de Abreu and are a for-profit venture for de Abreu, have been televised. The process used to decide who receives them, though, is no more transparent than it was in the pre-television days, when nominees would occasionally joke about the lack of credibility and the fact that awards often went to films that had yet to be seen or even completed.

“Who voted for these things?” asked Judd Apatow from the stage two years ago. “I’m told somebody named Carlos. I’m going with Carlos the Jackal.”

When asked by TheWrap to supply information about how the awards were decided, a representative for the show said only that the decisions were made by “an advisory and selection team of film industry insiders and executives.”

The party line is that those insiders and executives aren’t identified to prevent lobbying – though publicists and studio executives who’ve landed clients on the show say that the process is entirely dependent on lobbying and negotiating, and on the ability to deliver a star to be honored and another star to present that honor. (The Hollywood Film Awards is not the only awards body to negotiate awards, but its televised status makes the lack of transparency more problematic.)

Think of it as a campaign stop disguised as an awards show.