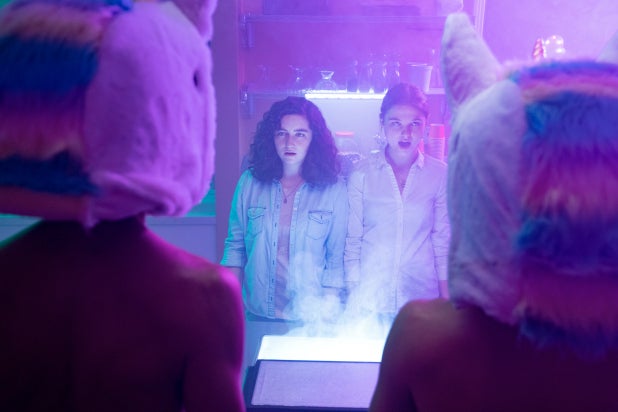 The comparisons are inevitable, so we might as well get them out of the way: “Good Girls Get High” sounds a lot like “Booksmart” because, well, it is a lot like “Booksmart.” But if its heroines can co-exist as joint valedictorians, there’s no reason we can’t embrace a pair of like-minded comedies about brainy teens who decide to go wild before high school ends.

The movie is narrated by Sam (Abby Quinn, soon to star in the “Mad About You” revival). She’s making a video for Harvard’s admissions team, in hopes she can undo an impulsive mistake. She got accepted, but her single dad (Matt Besser, “Comedy Bang! Bang!”) is struggling just to keep his old-fashioned ice-cream shop open in the Instagram era. Having been denied financial aid, she impulsively turned down their acceptance in order to join her BFF Danielle (“A.N.T. Farm”‘s Stefanie Scott) at State. But then Danielle got into Harvard too, and now Sam has to scramble to explain why she’s changed her mind.

This mostly takes the form of lessons learned from the previous 24 hours. In the time-honored tradition of countless movies made well before “Booksmart,” the girls have realized that their quest for academic excellence has blinded them to the sorts of after-hours extracurriculars their peers have been pursuing. Sam is perfectly fine with this, but Danielle pushes for at least one night of debauchery.

Also Read: 'Mad About You': Anne Ramsay and Jerry Adler to Reprise Their Roles on Spectrum Revival

Their subsequent trajectory wouldn’t surprise anyone with even a passing knowledge of the teen canon. They get high, crash a graduation party, get arrested, and make all kinds of discoveries about sex, drugs, life, and love. They also get pulled apart and have to decide if they’ll actually be stronger together.

Cynicism often curdles movies of this kind but director Laura Terruso (“Fits and Starts”), who co-wrote the script with Jennifer Nashorn Blankenship, underscores each scene with sweetness. She understands what drives her main characters, even when they veer wildly off-course. The two leads, former child actors who could still fairly be described as up-and-comers, navigate every curve beautifully, making these brilliant, baffled girls charming and frustrating and selfish and open-hearted in turn, often shifting gears before we’ve gotten our bearings.

In contrast, most of the supporting actors float by without leaving much of an impression. Terruso was smart enough to stack her movie with experienced scene-stealers like Besser and Anne Ramsay (“A League of Their Own”), who plays one of Danielle’s two moms. But then she neglected to give them space enough to steal their scenes.

Still, Lauren Lapkus (“Orange Is the New Black”) is funny as a heavily-pregnant cop who has zero interest in chasing down brainiacs gone bad. And as the girls’ crushes, Danny Pudi (“Community”) deftly avoids the usual clichés, while Booboo Stewart (“The Twilight Saga”) leans into them in amusing fashion. (“You have such an unironic way of being,” he drawls to a smitten Danielle. “It’s really refreshing.”)

Also Read: Here's Why Danny Pudi Says He and Donald Glover Will Always Be 'Troy and Abed'

Terruso has put most of her focus into the script and central performances, relying on minimalist production design and an indie rock and hip-hop soundtrack (Kil the Giant, Flipbois) that blend in rather than stand out. Some may notice that Olivia Wilde had a stronger handle on the technical aspects of “Booksmart” (and likely a bigger budget), but ultimately both directors have achieved the same goal: giving us complex teen girls who have the freedom to act just as stupid as anyone else.

Could these comedies actually mark the start of an ongoing trend? Can’t hardly wait.