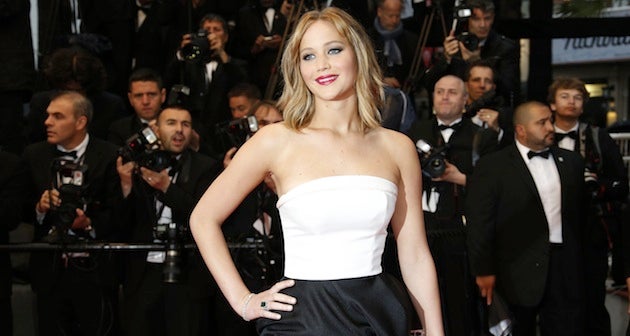 Joel and Ethan Coen didn’t even have to show up at Cannes to make a big impression.

The Coen brothers’ new movie, “Inside Llewyn Davis,” was the talk of the Croisette on Saturday, even though it doesn’t have its public premiere until Sunday at the Grand Theatre Lumiere. On a day when Arnaud Desplechin’s “Jimmy P.” and Kore-Eda Hirokazu’s “Like Father, Like Son” debuted in competition, all eyes were on the press preview of the Coen’s film about the Greenwich Village folk scene of the early 1960s. “The Coens have made what is likely to be one of the best films of the year, and certainly among their own best work,” wrote Sasha Stone at TheWrap.

The film prompted a line of folks waiting in the rain for a couple of hours to get into the Salle Debussy, but afterwards there wasn’t much grumbling about the weather. Hollywood Elsewhere’s Jeff Wells, who had made a crack about “20,000 people in this town with damp socks,” immediately dubbed “Llewyn Davis” “some kind of brilliantly somber, wonderfully atmospheric, dryly hilarious, pared down period masterpiece – a time-tunnel visitation to 1961 Greenwich Village that feels so meditatively right and authentic and resonant that I can’t wait to see it again.”

The trades raved as well. To Variety’s Scott Foundas, the film is “boldly original” and “highly emotional”; to THR’s Todd McCarthy, it is “a gorgeously made character study leavened with surrealistic dimensions both comic and dark,” and “a singular work by the protean filmmaking team.”

William Goss at MSN Movies suggested it was a minor Coen brothers work, but added, “To call ‘Inside Llewyn Davis’ a minor work doesn’t render it any less a pleasure to watch.”

But at indieWIRE, Eric Kohn argued that the film “isn’t the minor Coen bros. movie it looks like,” praising its use of music and its gentle touch. “An ode to art for art's sake, ‘Inside Llewyn Davis’ is the most innocent movie of the Coens' career, which in their case is a downright radical achievement,” concluded Kohn.

The film will get its gala moment on Sunday, but it certainly didn’t need a red carpet to become one of the Cannes must-sees.

The flip side might be Desplechin’s “Jimmy P. (Psychotheraphy of a Plains Indian),” which debuted with a gala premiere that attracted Jennifer Lawrence (in town for a lavish “Hunger Games: Catching Fire” party), but also drew some of the most negative reviews of the festival. The story of a Native American World War II vet played by Benicio del Toro and a psychotherapist played by French actor Mathieu Amalric, “Jimmy P.” was inspired by the films of John Ford and Francois Truffaut, said Desplechin in an interview with Cineuropa’s Fabien Lemercier.

"[T]he movie suffers from being too light and too heavy at the same time," wrote TheWrap's Sharon Waxman. "The stakes are rather lightweight (especially given the history of Native Americans) and the treatmen of those stakes ponderous."

Overall, the critics treated it roughly: “[The] film is an uneven mess, a talky dud and an irrelevant adaptation that is drier than the musty library book it’s based on,” wrote Jake Howell.

Added Guy Lodge at In Contention, “The French writer-director is typically one of his country’s liveliest talents … but he’s come a cropper in this lethargic, self-important psychiatry study, which he himself seems to have directed from the couch.”

Meanwhile, 84-year-old Chilean director Alejandro Jodorowsky, best known for his 1970 midnight-movie classic “El Topo,” has returned to Cannes with his vaguely autobiographical “The Dance of Reality,” and with Frank Pavich’s “Jodorowsky’s Dune,” a documentary about the director’s failed attempts to make a film version of Frank Herbert’s sci-fi epic “Dune.”

“The Dance of Reality,” which screened in the Directors’ Fortnight section on Saturday, is reportedly surreal enough to baffle audiences; Eric Kohn called it “noticeably small” and “unapologetically messy,” and he liked it.

But to hear Jodorowsky tell it to the L.A. Times’ Dennis Lim, a little confusion is fine with him. “The Surrealists thought [film] was the real new art of the century, but now it’s the worst,” he said. “I told the producer, ‘I want to make a picture to lose money.’ I am tired of all that money. Movies are an art, not a business.”