In this morning’s roundup of movie news ‘n’ notes from around the web, Fox has a birthday and Cannes faces a boycott.

20th Century Fox turns 75 this year. Susan King has the history, and details of the party, which will range from special screenings (“The Day the Earth Stood Still” in Washington, D.C.) to a Hollywood Bowl concert to a DVD set chosen by Fox chiefs Tom Rothman and Jim Gianopulos. Maybe if the studio had made a fuss about this earlier in the year, more Oscar voters might have decided that a Best Picture vote for “Avatar” would have made the perfect gift. (Los Angeles Times) 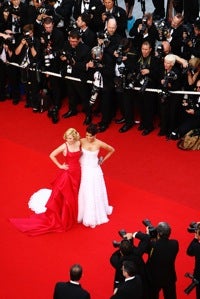 The press conference announcing the Cannes Film Festival lineup, which took place in the wee hours of Thursday morning in all U.S. time zones, was not as widely covered as it has been in years past. That’s because several news organizations, including the Associated Press, Reuters, Getty TV and Agence France-Presse, boycotted the news event to protest some newly-instituted restrictions on video footage from the festival, which begins on May 12. Now the agencies, according to BBC News, are threatening to boycott Cannes altogether. Something tells me we’ll hear about what goes on there regardless. (The BBC) (Cannes 2009 photo by Sean Gallup)

That fancy French festival wasn’t the only one to announce its lineup this week. The TromaDance Film Festival, an annual salute to the kind of cheap, colorful exploitation films made by the legendary Troma Entertainment (and a considered alternative to Sundance, hence the “Dance” part of its name), unveils a slate that includes “Poultrygeist: Night of the Chicken Dead,” “Pesticide,” “Sinkhole,” “Zombies and Cigarettes,” “Small Penis” and other movies that will probably struggle to live up to their titles. As an added bonus, the fest – which begins this weekend – has moved from the scenic environs of Park City, Utah, to the dingier and more apt Asbury Park, New Jersey. Mike Everleth celebrates the awfulness on Bad Lit, and the official TromaDance website fills in the details.

First it was going to be an R-rated caper buddy movie called “All New Enemies,” then it was “Wichita” and was offered to Adam Sandler, then it was “Trouble Man” with Chris Tucker and Eva Mendes … Michael Cieply traces the upcoming Tom Cruise/Cameron Diaz movie “Knight and Day” through the torturous development process, which in this case included three studios, at least three directors, a boatload of writers and a bunch of complications. If the movie’s a hit when it comes out in June, that means a whole lot of people will have a chance to take some of the credit. (New York Times)

A New York judge has dismissed a lawsuit filed by International Media Films over a pornographic film called “Michael Lucas’ La Dolce Vita” – and one of the reasons for his ruling, Reuters reports, is that the judge can’t be sure that IMF actually owns the rights to Frederico Fellini’s classic “La Dolce Vita,” and thus might not be entitled to claim copyright infringement. At issue is a very tangled chain of custody, which may have led to IMF but just as likely might mean that the film is in the public domain. At any rate, the ruling leaves Fellini’s 1960 film in an odd legal no man’s land.  (Reuters via Yahoo! News)

Stephen Farber wonders why he hasn’t heard any complaints from the usual Hollywood-bashing conservative groups over “Greenberg,” in which one character has an abortion without anguishing over it. As he points out, that puts the Noah Baumbach film in a distinct minority amidst recent films like “Juno” and “Knocked Up.” Note: his piece includes spoilers, so you ought to see the movie (which is definitely worth seeing) before you read it. Unless you have absolutely no interest in seeing it, in which case I guess you can go ahead. (The Daily Beast)