In this morning’s roundup of Hollywood news ‘n’ notes from around the web, movies kick ass, and Warren Beatty’s ego shortchanges his editor.

Anne Thompson pays tribute to editor Dede Allen, who died on Saturday. Besides nice words about her job on “Bonnie and Clyde” and the way she saved the ending of “Planes, Trains and Automobiles,” Thompson offers a priceless anecdote about why Warren Beatty neglected to thank Allen when he won the Best Director Oscar for “Reds” – apparently, Beatty claims he was saving that particular thank-you for when he won Best Picture, the award that went to “Chariots of Fire” instead. Oops. (Thompson on Hollywood) 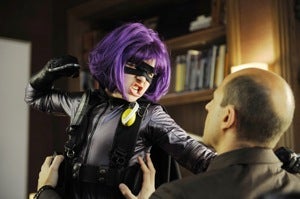 Patrick Goldstein surveys the controversy over “Kick-Ass”: is it a “morally reprehensible,” irresponsible collection of “deadly carnage” (Roger Ebert), or “a guilty pleasure of the highest order … designed to thrill geeks and outrage prudes” (Colin Covert, The Minneapolis Star-Tribune)? Goldstein rounds up the reviewers on both sides of the argument, but doesn’t really take any stance himself. I think the movie is something of a kick, taken on its own ridiculously excessive terms – but I have to say, I wasn’t comfortable with the fact that when I saw the R-rated film in Century City over the weekend, the row in front of me was occupied by a mom and three kids who appeared to be between the ages of six and nine. But one of the kids called it “the best movie I’ve ever seen” as he was walking out of the theater, and none of them seemed disturbed by the carnage … (The Big Picture)

The HeraldTribune from Sarasota, Florida runs down the winners at the Sarasota Film Festival: Korean director Ounie Lecomte’s “A Brand New Life” for the narrative feature award, Oscar nominee Laura Poitras’s “The Oath” for documentary feature, plus jury prizes for “Gasland” and Winter’s Bone,” both of which also won awards at Sundance. That last film, from “Down to the Bone” director Debra Granik, has now picked up honors at Sundance, Berlin and Sarasota, but can the Roadside Attractions feature, which gets a limited release in June, actually make the leap to the big leagues and become a non-festival awards contender? That’s a tough one … (HeraldTribune)

Steven Zeitchik goes to Asheville, North Carolina for a film festival that will definitely not be spawning any Oscar contenders: the ActionFest, which calls itself a “film festival with a body count” and precedes every screening with trailers from Chuck Norris movies. Magnolia Pictures is behind the fest, which also includes guys flying around in jetpacks (“Kick-Ass” has one of those), Chilean action stars, and panels full of stunt coordinators and second-unit directors. The headline says the ActionFest is “a touch of Cannes,” but I must have missed that part. (24 Frames)

More fest news: April 21 is the kickoff of Roger Ebert’s 12th annual film festival, which this year will stream live at ustream.com. The movies include “Apocalpyse Now,” “Trucker,” “Barfly,” “Pink Floyd The Wall” and “Synecdoche, New York,” among others. An odd mixture of ambitious undertakings and fascinating failures, but all of them faves of Ebert’s. (Roger Ebert’s Journal)

In New York, meanwhile, the three film pros in charge of launching the new DOC NYC festival convene a group of about 40 interested parties to give advice on what their festival should look like. Filmmaker Magazine looks at the results of the Friday breakfast ‘n’ brainstorming session, and throws out a whole bunch of suggestions: eliminate the competition; give more prizes; host dinners for filmmakers; don’t get too concerned about premieres; expand the definition of a documentary so it includes more than just straightforward storytelling. And on and on and on … (Filmmaker)