In this morning’s roundup of Hollywood news ‘n’ notes from around the web, repressive politics get in the way of Cannes, and is “Date Night” illegal?

Iranian director Jafar Panahi is being held as a political prisoner in his home country, charged with making a film “against the regime.” (The charge deals not with a film he’s already made, but with one the government says he was in the process of making; his wife denies this.) The possibility that Panahi will be released and allowed to go to Cannes is remote, although the festival has pointedly invited him to become a jury member. Lynden Barber suggests that if he isn’t allowed to appear, his absence will speak volumes: “[T]here’s nothing so potent as … the symbolism of an empty chair.” But will the Iranian government care one whit about that symbolism? (The Australian) 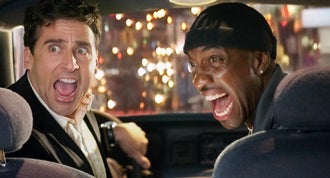 If you saw “Date Night” (and if you did, I’m sorry), you may remember the scene in which Steve Carell borrows a Kindle from a cab driver (!), plugs in a flash drive, and accesses some photos that figure prominently in the plot. And if you have a Kindle, you might know that it doesn’t come equipped with the kind of USB port that accepts a flash drive. Ian Ayres asks a question: if Amazon paid for product placement to put the Kindle in the movie (and why would it be there if they hadn’t?), doesn’t the scene misrepresent the product, and as such doesn’t it violate the Lanham Act? Or is the whole thing so ridiculous that it’d be nuts to think that the scene is making any real claims about the device’s capabilities? I’d opt for the latter, but the Freakonomics blog mulls it over … and then the Hollywood Reporter’s THR, Esq. column weighs in as well.

Here’s how to make a blockbuster summer movie, in 10 easy steps: “Pick a date … Get a green light … Shoot your movie … Reshoot your movie – this time in 3D … Ignore the critics …. ” Okay, the steps aren’t that easy. But Tom Shone pretends that they are, because it’s more fun that way. (The Times)

The Tribeca Film Festival hosts a panel to answer the question, “Is the Sky Falling?” (The sky, in this case, is where independent movies frolic.) The answer, according to the festival blog, seems to be no – though the indie scene is certainly a tough one these days, and one in which distributors and filmmakers need to figure out ways to promote films by any means necessary. “Filmmakers today need to take responsibility for both the art and the frame,” said producer Ted Hope. And maybe they need to provide a hammer and nail to hang it on the wall, too. (TribecaFilm.com)

A group of 16 Tribeca directors, meanwhile, talk to indieWIRE about their films. Corruption, juvenile delinquency, improvisation, family, forgiveness, truth and artifice, birdwatching — take your pick, they’re all here. And there’s even one director who says “I didn’t achieve the greatest of results,” though he’d still like you to see his movie. (indieWIRE)

While Tribeca has gotten a lot of the film-festival attention the past week, there’s another fest going on in Northern California – and the San Francisco International Film Festival is actually the longest-running festival in the country. Meredith Brody goes to the “warm schmoozefest” that is opening of the 53rd SFIFF, and reports back from the gala screening of Jean-Pierre Jeunet’s “Micmacs.” Anne Thompson hosts Brody’s roundup, which finds the slapstick comedy to be the perfect curtain-raiser. Then Brody moves on to day two, where she loves "Constantin and Elena" but isn’t crazy about "Around a Small Mountain." (Thompson on Hollywood)

The Los Angeles Times surveys the world of 3D, starting with a piece on the 3D school being offered by Sony Pictures. (If you read the recent story on these classes in theWrap, you’re probably familiar with a lot of this.) Also: John Horn lists the 3D films due out this summer, from “Shrek Forever After” and “Toy Story 3” to “Cats & Dogs: The Revenge of Kitty Galore” and “Step Up 3D.” And Glenn Whipp goes to the movies, sees “Alice in Wonderland,” “Clash of the Titans” and “How to Train Your Dragon” in 3D, talks to patrons, and reaches entirely predictable conclusions: the technique doesn’t add much to “Alice,” it’s used well in “Dragon” … and the conversion of “Clash” is a complete mess. (Los Angeles Times)