In this morning’s roundup of movie news ‘n’ notes from around the web, James Cameron pushes for interplanetary 3D, but Roger Ebert begs to differ.

Apparently not content with directing the biggest movie ever made and causing the movie industry to stampede to 3D, James Cameron is now helping NASA equip the next Mars rover. The AP reports that Pasadena’s Jet Propulsion Laboratory was planning to replace a proposed 3D camera on the rover with a standard cam, because the project was “consistently over budget and behind schedule.” But Cameron (who, let’s face it, knows a thing or two about being over budget and behind schedule) encouraged NASA to go for 3D because the public will respond better to those images. So now when the Curiosity mission is launched next year, it’ll have 3D. Hey, if they can film in 3D on Pandora, Mars ought to be a piece o’ cake. (The AP via Yahoo! Movies) 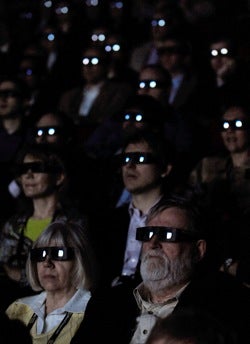 Roger Ebert, on the other hand, doesn’t even want 3D on the planet Earth. “A waste of a perfectly good dimension,” he calls it in an op-ed piece in Newsweek entitled “Why I Hate 3D (And You Should Too).” His litany includes: it doesn’t add anything, it’s distracting, it can cause headaches, it’s too dark, it’s just a ploy to jack up prices, it’s not suited to serious dramas … There’s more, but you get the idea. (Newsweek)

Now that DreamWorks Animation has announced that it’ll be making a sequel to “How to Train Your Dragon,” Steven Zeitchik makes a case that it really shouldn’t. His reasoning: “Dragon” showed that DreamWorks can be commercial and critically successful, ala Pixar … but sequels put the focus on ready-made merchandising over artistry. (“There’s a reason the last eight Oscar winners for best animated film have been stand-alone movies.”) If they really want to be like Pixar, he says, they ought to act like Pixar and stay away from sequels. I think Zeitchik is probably right, though the timing of his argument (just before the release of Pixar’s “Toy Story 3”) doesn’t do him any favors. (24 Frames)

Jeff Wells reveals one bit of fallout from the potential trading of movie futures: one unnamed studio, which had been in the habit of providing tracking reports to “certain producers and production companies” (and, I’d guess, journalists), sent out an email on Thursday informing those recipients that no one without a studio email address would be given tracking info in the future. Then one of Wells’ readers adds a little perspective: “so a certain studio was releasing (paid for) proprietary information to unauthorized users who had not paid for the tracking reports. but now they’re not going to get the information they were never entitled to in the first place.” (Hollywood Elsewhere)

Todd McCarthy, the longtime Variety critic who lost his job when the floundering trade paper decided it no longer needed staff critics, has landed at indieWIRE, where on Thursday night he launched a blog called Todd McCarthy’s Deep Focus. Anne Thompson has the story (her blog is hosted by indieWIRE, too), while McCarthy kicks off his new gig with a big headline, “Hello World!” and a promise that he’s been “refitted from being an old print guy to one ready to jump into the deep end of all-electronic, all-the-time film commentary.” The commentary is still to come, starting with the Cannes Film Festival – though he teases by saying that he’s seen one “major festival entry” that’s exhilarating, and that he hears at least two others are really good, too.