In this morning’s roundup of movie news ‘n’ notes from around the web, Twitter predicts boxoffice returns, while product placement and 3D controversy live on.

Apparently, following movie mentions on Twitter is the best way of predicting boxoffice performance available. That’s the conclusion reached by the Social Computing Lab at the HP Labs in Palo Alto, which looked at 3 million tweets and came up with a graph remarkable for its accuracy. The study, “Predicting the Future with Social Media,” is here.  Kevin Kelly summarizes the study, and a reader makes his own prediction: “Works fine until people realize it works, then they start gaming it, and it stops working.” Given the size of Twitter, that’s gonna require a hell of a lot of gaming. (The Technium) 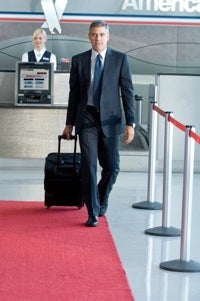 The New York Times looks at the current state of product placement in movies – in which, says Stephanie Clifford, “writers and producers themselves are cutting the deals often before the movie is cast or the script is fully shaped.” I’ll buy that – and she produces some good examples of the process, from “Up in the Air” (left) to yet-unfilmed projects – but it’s a bit of overstatement, to say the least, to add a line like his one: “Now, having Campbell’s Soup or Chrysler associated with your project can be nearly as important to your pitch as signing Tom Cruise.” (The New York Times)

Carolyn Giardina looks at a running theme in last week’s reviews of boxoffice champ “Clash of the Titans” – that the movie’s use of 3D is not worth the extra price of admission, and in fact hurts the film – and wonders if the negative word “might threaten to put the brakes on conversion — and possibly even derail the runaway 3D train.” Given the grosses for “Avatar,” “Alice in Wonderland” and “Titans,” it’s probably overly optimistic to think that anybody’s going to show down, despite the scary potential of the current combination of a “gold-rush mentality” and 3D vendors trying to cut their prices. (The Hollywood Reporter)

DreamWorks’ Jeffrey Katzenberg made a salary of $1 last year, but that hardly means he went home empty-handed: Richard Verrier looks at a company regulatory filing and says Katzenberg did receive stock and option awards worth $23.4 million last spring.  The point of the compensation package, claims DreamWorks, is to put Katzenberg "at approximately the 50th percentile" for entertainment moguls.  (Company Town)

WonderCon – which is essentially ComicCon’s little brother – took place over the weekend in San Francisco, showing off footage from what are euphemistically called “genre films” – in this case, “Sorcerer’s Apprentice,” “Prince of Persia: The Sands of Time,” “Kick-Ass,” “The Losers,” “Nightmare on Elm Street,” the mainstream (i.e., not really a genre film) “Toy Story 3,” and Chris Nolan’s highly anticipated, and relentlessly secretive, “Inception.” Anne Thompson has a brief roundup. (Thompson on Hollywood)

And Kevin Polowy takes a fuller look at WonderCon, and points out that “inside the venue was practically indistinguishable” from ComicCon: “Stomtroopers, Spocks and the occasional Smurf abounded.” He does not exactly indicate whether or not this is a good thing. (Moviefone)

Erik Gruenwedel asks controversial mogul Mark Cuban six questions, most of them having to do with theatrical windows, video-on-demand and the (Cuban owns the Landmark Theaters chain, but also Magnolia Pictures, which often offers films VOD even before their theatrical release.) “I think the concept of windows has already disappeared for smaller releases,” he says. (Home Media Magazine)