In this morning’s roundup of movie news ‘n’ notes from around the web, it’s a new world in casting announcements, but P.A.s still get the shaft.

David Robb speaks up on behalf of Hollywood’s production assistants, especially the unpaid ones, whose use violates labor laws even though they’re often dubbed “interns” in an attempt to justify the lack of salary. Turns out that true interns aren’t legally allowed to do any work that would normally be performed by a paid worker. The Craigslist add offering no pay for a P.A. gig that involves camera and lighting setup, equipment transportation and “heavy lifting” is particularly offensive, though by now I suspect it’s found a taker. (The Hollywood Reporter)

Can you take it seriously when a filmmaker (say, Jon Favreau) announces a piece of casting (say, Harrison Ford for “Cowboys & Aliens”) on Twitter, instead of going the usual studio-press-release route? The Los Angeles Times’ Steven Zeitchik wonders about that, and suggests that maybe Favreau’s announcement (to which the director appended “Please don’t tell anybody”) was nothing but “social-media performance art.” In the end, he figures that Favreau was serious, and that we live in a new age. He says that studios don’t like it, but I think the L.A. Times doesn’t like it, either. (24 Frames)

Anne Thompson debuts a new bi-weekly column for Moviefone, in which she’ll look at the recent moves of a major star and offer career advice. She starts with an obvious choice, recent Oscar winner and current tabloid queen Sandra Bullock, recapping the artistic peaks and the personal turmoil alike. She also scolds “tabloid sites” that “breathlessly run any sordid blog item in search of traffic.” For her part, Thompson merely alludes to those sordid blog items. I suppose it would not be inaccurate to suggest that Thompson and Moviefone are, shall we say, “in search of traffic” with their choice of Bullock to begin this new feature. (Moviefone) 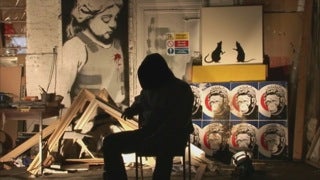 Exactly how are you supposed to market “Exit Through the Gift Shop” (right)? The Sundance hit, which comes to Los Angeles, New York and San Francisco next week, might be a documentary or it might be fiction; it might have been directed by its subject, a mysterious, political English graffiti and street artist who goes by the name Banksy, but then again maybe not; Banksy is a control freak who wants to dictate the promotion of his work, but he doesn’t appear in public and the person distributing his film has never met him. John Sloss from Cinetic Media, who bought the rights to the film, tells Peter Knegt that the film is “a highly unlikely project for a traditional distributor.” So Sloss, who’s not a traditional distributor – in fact, until now he hasn’t been a distributor at all – is doing it himself. Sounds fascinating … and sounds like a very tough sell. (indieWIRE)

Filmmaker magazine finds an instructive and timely blog post from a pair of married producers, “Joke and Biagio,” who’ve created a template that’ll allow you to write a screenplay on an iPad. In case you have a new iPad and an inclination to use it for all the things you used to do on your computer. Or you could wait until Final Draft unveils its own iPad app, though no doubt that’ll be a lot more expensive. (Filmmaker Magazine)