In this morning’s roundup of movie news ‘n’ notes from around the web, Kristen Stewart takes her sad face to MTV, while summer films hope Facebook gives them happy faces.

“Better marketing through technology?” Mediashift makes a case study of how six summer movies are using Facebook. The “Iron Man 2” page is solid but “nothing to marvel at,” “Sex and the City 2” is glossy, “The A Team” hides its best feature, “Despicable Me” is building two Facebook communities, “Toy Story 3” benefits from Disney’s ticket-buying app, and “The Twlight Saga” eclipses the rest because it satisfies the franchise’s huge, “insatiable” fan base. (Mediashift) 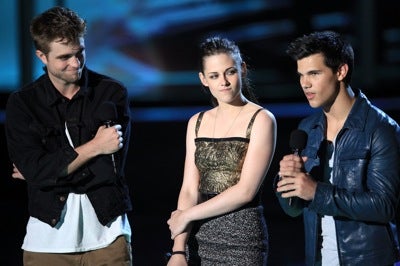 The New York Times puts together an instructive and entertaining photo essay illustrating the many moods of Kristen Stewart over the course of the MTV Movie Awards. The fact that all of those moods appeared to be slight variations on bored and sullen only means that Ms. Stewart treats those particular awards, at which her movie won everything it could and then some, the same way that she treats every other awards show. I suppose staying home is not an option, but geez… (Arts Beat) (Photo by Christopher Polk/Getty Images)

Michael Winterbottom’s “The Killer Inside Me” is such a brutal, violent film – with much of violence directed against Jessica Alba – that after its festival screenings it prompted complaints about gratuitous violence and misogyny. But Hadley Freeman has a different viewpoint altogether: she thinks its brutality makes it “an unexpectedly moral film,” and one that’s far less gratuitous or misogynistic than works by Guy Ritchie or Quentin Tarantino. “’The Killer Inside Me’ shows violence as something that causes irrevocable damage,” she says. “It is not sexy, nor set to some adrenaline pumping hip-hop or rock’n’roll soundtrack.” That said, it doesn’t sound as if she enjoyed the movie very much. (The Guardian)

Sometimes, apparently, it can be just as bad not to release a movie as to release one and have it fail. Eriq Gardner reports that “Crash” producer Bob Yari has been ordered to pay more than $6 million to three international film distributors who sued Yari’s company for its failure to release a pair of films. Yari, who has been in and out of Chapter 11 in recent years, was sued by Momentum Pictures, Aurum Producciones and Alliance Films for not giving “Addicted,” with Sarah Michelle Gellar, and “Accidental Husband,” with Uma Thurman and Colin Firth, the contractually obligated theatrical release. The plaintiffs won the case on a summary judgment two months ago, and were awarded about $6.1 by a judge last week. (THR, Esq.)

Jette Kernion has a question: “Do unpronounceable movie titles hinder a movie’s popularity, or are they simply part of the fun?” Prompting this query is an upcoming, New Orleans-set documentary called “Tchoupitoulas,” named after a Crescent City street that leads to the musically fertile Uptown neighborhood. (It’s prounounced “chop-i-too-lus,” and if you add “Wild” in front of it you’ve got the name of a band that recorded one hell of a version of “Meet De Boys on the Battlefront” way back when.) In honor of the film, Kernion comes up with a batch of past movie titles that are hard to pronounce, and spell: “Synecdoche, New York,” “Koyaanisqatsi” and “Powaqqatsi,” “Ratatouille,” “Gigli,” “Zzyxx” and “Zyzzyx Rd.,” “Sssssss!” (“don’t say it, hiss it” was the tagline) and “Dick.” Okay, that last one isn’t unpronounceable – just embarrassing to say out loud, at least to Kernion. (Cinematical)