In this morning’s roundup of movie news ‘n’ notes from around the web, the topic du jour is bringing that extra dimension to movie screens.

Paul Young has a question: “[I]f 90% of all 3D films before ‘Avatar’ weren’t successful, either financially or critically, then why are we hearing about a new film getting the 3D conversion treatment every couple of days?” He says it’s all about higher ticket prices, and he thinks it’s something of a scam, particularly when it comes to converting films that were shot in 2D. He doesn’t like the glasses, either. And he doesn’t even get into the current scarcity of 3D screens, which has caused some serious griping between studios and exhibitors, and which James Cameron insists has cost “Avatar” an additional $200 million in grosses. (Screen Rant) 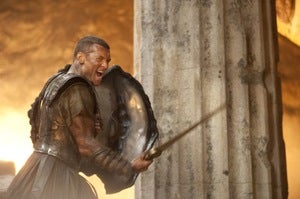 Young may have a particularly dim view of films shot in 2D and then converted, but Warner Bros. exec Alan Horn tells ShoWest that the process is good enough for his studio, which plans to release five 3D movies this year and nine in 2011. Plus all the studio’s upcoming tentpole movies – the final “Harry Potters,” the next Superman and Batman – will be 3D as well. Peter Sciretta heard the talk, saw 3D footage from “Clash of the Titans,” and rendered something less than a ringing endorsement: “It looked passable.” Passable – I don’t think that’s exactly what you’re looking for when you’re banking on a technology of the future. (/film)
Technicolor, meanwhile, has a deal for independent theater owners who don’t want to shell out $75,000 for the new digital projectors normally needed for 3D. The company used ShoWest to announce agreements with a dozen independent theaters, who’ll be using Technicolor’s system to show 3D images on a traditional projector by using a split lens. Some studios are going along with the plan, but Disney, Fox and Sony — three pretty major players in this arena — are not convinced. (Company Town)
Florida legislators change their minds about a bill that would make it impossible for films to receive tax credits if they promote “nontraditional family values.” When gay rights groups complained that the language might be seen as, you know, discriminatory, the state senate backed down. As Richard Verrier points out, the bill’s original sponsor, was doing his best “to promote wholesome family entertainment as depicted in the 1960s sitcom, ‘The Andy Griffith Show.’” Is it really too hard to figure out that that was a very long time ago, and that Mayberry never really existed anyway? (Company Town)
Blockbuster admits in its annual report that some major studios may be on the verge of cutting off credit to the company, which could force it into bankruptcy. Mary Ellen Lloyd points out that they said the same thing last year. (The Wall Street Journal)
If Blockbuster goes under, will indie video stores inevitably follow? Anne Wollenberg examines the pressure on (UK-based) rental stores, which one of her sources calls “an anachronism in a world where you can stream and download films legally, or order DVDs by post without having to physically return to the shop.” She also asks a salient question: considering that video clerk is a popular occupation for onscreen slackers in films ranging from “Clerks” to “Be Kind Rewind” to the new “Micmacs,” “will there come a time when they only exist in movies (which you won’t be able to rent from a shop)?” Maybe so. And then you can read about booksellers on your Kindle. (The Guardian)
International presales aren’t what they used to be. That’s both good and bad, reports Alex Ben Block: while the market is nowhere near what it was back around 2005, when most films with even the slightest pedigree could command decent sums internationally, it seems to have revived significantly over the massive slump of about two years ago. At the recent European Film Market in Berlin, sales were up … not for everybody, mind you, but for the “right project,” whatever that happens to be. (The Hollywood Reporter)
x
Looks like you're enjoying reading