In this morning’s roundup of movie news ‘n’ notes from around the web, Bill Condon woos the Twihards, summer movies arrive, and the AP forgets where Jeff Katzenberg works.

“Dear ‘Twilight’ fans: I’m not going to screw it up. Yours truly, Bill Condon.” That’s the gist of a letter that director Condon posted on Facebook over the weekend, assuring fans of the franchise that he loves the books, he loves Kristen Stewart and Robert Pattinson and Taylor Lautner, he loves vampires, and he’s been wanting to make another movie “with Gothic overtones” since he made “Gods and Monsters” in 1998. If I thought “Breaking Dawn” could be anywhere near as wonderful and moving as “Gods and Monsters,” I might even be excited. But I don’t, so I’m not. On the other hand, more than 3,000 people have responded to his note as of early Monday morning, so Condon is clearly engaging the target audience. Which, of course, is the whole idea.  Anne Thompson calls Condon "a smart cookie" for the letter, which was first noted by Slashfilm.   (Facebook) 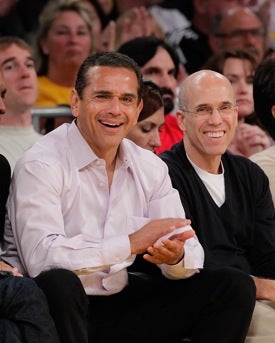 Here’s a story that has absolutely nothing to do with the movie business, but I couldn’t let it pass without mention: in the Associated Press’ account of the Los Angeles Lakers’ victory over the Utah Jazz in the first game of their second-round NBA playoff series, the last line of Greg Beacham’s story was, “Courtside fans included Sylvester Stallone, director Michael Bay and former Walt Disney Co. CEO Jeffrey Katzenberg, who also attended Floyd Mayweather Jr.’s victory over Sugar Shane Mosley in Las Vegas on Saturday night.” Yikes! How do you think Jeff Katzenberg feels, 16 years after leaving Disney and co-founding DreamWorks SKG, at being identified with the company where he worked for 10 years (and left in some acrimony) rather than the one he’s run ever since? (The AP via Yahoo! Sports)

It’s the first week in May, and that means an action-packed, big-budget, major-studio movie with a number in its title is being released at the end of the week. (In this case, it’s “Iron Man 2.”) And that can only mean one thing: Summer Movie Previews! The New York Times observes the ritual with four different roundups, one for each month: May, June, July and August.

The L.A. Times, not to be outdone, has one big roundup of everything, from “Babies” (May 7) to “Resident Evil: Afterlife” (September 10). Plus a page that links to stories about every imaginable aspect of summer films.

Antagony & Ecstasy only lists the May movies, but then predicts the 10 biggest movies of the summer: “The Twilight Saga: Eclipse” at number one, followed by “Iron Man 2,” “Toy Story 3,” “Shrek Forever After” and “Robin Hood.” “Twilight” and “Robin Hood” seem vulnerable to me, and it wouldn’t surprise me if three of his second five finish out of the running, but that’s just a gut feeling based on having seen none of ‘em … (Antagony & Ecstasy)

As part of the L.A. Times’ summer movie preview, Betsy Sharkey writes about summer movies for grown-ups. But instead of lamenting that there aren’t enough of them, she’s afraid that the ones that will be released (indies like “The Oath,” “Restrepo,” “Winter’s Bone,” “Ondine,” “I Am Love” and several others) will be ignored by moviegoers. In other words, her complaint isn’t that summer movies are too juvenile, but that adult moviegoers aren’t quite grown-up enough to appreciate the movies they should like. But she thinks they’ll probably go see Tom Cruise in “Knight and Day” and Angelina Jolie in “Salt.” The story also mentions “The Blind Side” and “Marley & Me” – and if you click on the names of those films, they take you to Amazon.com pages where you can buy the DVDs. The titles are highlighted in green – which the Times says is to alert viewers to the fact that these “Green Links” go to third-party e-commerce sites, though you could also say that the color is a pretty good indicator of exactly why the Times has introduced the feature. (Los Angeles Times)

Peter Knegt reports from the Tribeca Film Festival “Pen to Paper” panel at which three screenwriters talked about the writing process. Ed Burns says he wrote his first film (“The Brothers McMullen”) based on locations where he knew he could shoot for free; Carmel Winters (“Snap”) thinks she writes better with restrictions; and David Baddiel (“The Infidel”) sounds a warning: “the minute you write a screenplay, basically you’re saying that this is the template for something that loads of other people are going to change and make happen in ways that might not be exactly how you envisioned it.” Welcome to Hollywood. (indieWIRE)

A.J. Schnack looks at “Monica & David” and “The Arbor,” the two documentaries that won awards at Tribeca (not including the audience award winner “Rush: Beyond the Lights,” which took a prize that isn’t doc-specific). “The Arbor,” a portrait of playwright Andrea Dunbar that blends non-fiction and fiction techniques, sounds particularly intriguing. (All These Wonderful Things)