In this morning’s roundup of movie news ‘n’ notes from around the web, Tribeca wraps, “Little Miss Sunshine” sings, and teens watch trailers.

Eric Kohn points out that for years, people have been complaining about uninspiring programming at the Tribeca Film Festival. Then, to mark the end of the 2010 festival, he complains about the uninspiring programming. Kohn’s point: a birth “out of the ashes of the World Trade Center” and the participation of Robert DeNiro does not a “cogent identity” make. He did like some of the movies, but finds them lost in a “sea of mediocrity.” Kind of like most film festivals, actually. (indieWIRE)

Patrick Goldstein does his yearly stunt in which he takes a batch of neighborhood teenagers, shows them a batch of summer movie trailers, and pretends his geographically convenient focus group means something. In an effort to address that shortcoming, this year he goes outside the neighborhood – all the way down to Orange County, with a group of kids who attend public school, no less. For the record, they liked the trailers to “Inception,” “Iron Man 2” and “Get Him to the Greek,” and didn’t like “Karate Kid,” “Knight and Day” and “The Twilight Saga: Eclipse.” And a lot of them had already seen the trailers online. (The Big Picture) 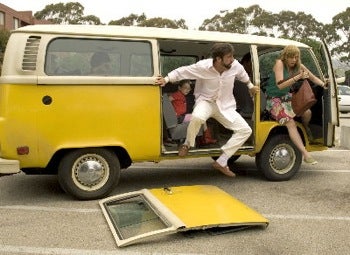 The 2006 indie hit (and Best Picture Oscar nominee) “Little Miss Sunshine” will resurface in unusual form early next year: according to Entertainment Weekly’s Emily Exton, a musical theater version of the comedy by directors Jonathan Dayton and Valerie Faris will open at the La Jolla Playhouse near San Diego. Apparently, theatrical heavyweight James Lapine (“Sunday in the Park with George”) and his collaborator on the hit show “The 25th Annual Putnam County Spelling Bee,” William Finn, are working on the stage adaptation. Let’s hope they don’t write a new song in place of the movie’s finale, which is memorably staged to Rick James’s “Super Freak.” (PopWatch)

New York Times policy says that the final word in the title of Jay Roach’s upcoming comedy "Dinner for Schmucks" is potentially offensive, and should be used as sparingly as possible.  So Michael Cieply only uses the word twice as he writes almost 1,000 words on the movie, the etymology of a Yiddish word that means penis, and how a more accurate title might be "Dinner for Schlemiels."  He may be right, but schmucks is funnier.   (New York Times)

Want to rescue “Anchorman 2” from the oblivion to which it might be doomed? S.T. VanAirsdale apparently does, so he’s come up with 10 ways to bring the proposed sequel’s budget down from its current $70 million, which Paramount reportedly says is too expensive, to the $40 million that the studio will accept. Among his suggestions: bring it in the present, saving money on those ‘70s clothes and set designs; replace Paul Rudd with Sam Worthington, and do away with Steve Carell entirely; get tax credits and product-placement bucks; and replace Christina Applegate with Mischa Barton. The result might get a greenlight, but I don’t think I’d want to see it. (Movieline)