In this morning’s roundup of movie news ‘n’ notes from around the web, "Inception" drops a few hints, and one writer swears that some summer movies are actually pretty good.

Ah, the summer tentpole – a big-budget, big-studio, big-grossing movie that usually isn’t very good, not that artistic quality matters much under these circumstances. Tim Brayton decides to celebrate the beginning of Tentpole Season by listing “ten great summer blockbusters since 1989.” He starts with “Terminator 2” (sure), moves on to “Batman Returns” (really?) and ends with “The Bourne Ultimatum” and “The Dark Knight” (both pretty unassailable). In between are the likes of “Jurassic Park,” “Men in Black,” “Spider-Man,” “Mr. and Mrs. Smith” (!) and “Apollo 13,” the last of which looks awfully grown-up in this company. (Antagony & Ecstasy) 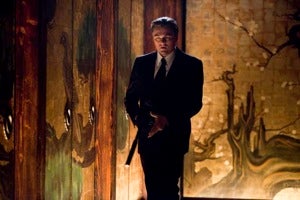 “This summer, your mind is the scene of the crime.” An intriguing tag line, to be sure, and one that comes at the end of a plot synopsis that offers as much official information about Chris Nolan’s “Inception” as the secretive filmmaker has yet revealed. The Playlist Nation has the synopsis, just released by Warner Bros. – and while it’s hardly revealing (anybody who’s been paying attention knows that the movie is about “dream thieves”), any official info is welcome. The site predicts a strong opening and decent boxoffice grosses, but nothing record-breaking: “Sadly, this picture looks too smart for the summer crowd, but we hope we’re wrong.” (The Playlist Nation)

You’ve probably noticed that movie tickets are more expensive than they used to be. The National Association of Theater Owners says it knows exactly how much more expensive, and the Hollywood Reporter has the figures: ticket prices rose six percent in the first quarter of 2010, a three-month jump that almost doubled the average yearly rise in prices. If you’re looking for a culprit, blame 3D, and the added charges invariably added for movies in the format. Of course, NATO plays the inflation card to explain that we aren’t really being gouged: a spokesperson insists, “the average price of a movie ticket, adjusted for inflation, is less expensive than it was in 1969." I suppose that’s reassuring.  A little.  (The Hollywood Reporter)

Jeff Wells looks at the Los Angeles Film Festival lineup, and labels himself unimpressed. And he doesn’t like the idea of going to downtown L.A. to see movies. Plus, he says he spits on “The Twlight Saga: Eclipse.” (Hollywood Elsewhere)  David Poland, meanwhile, doesn’t quite know how to get a handle on the programmers’ intent: “Is there a voice to this festival or is it just a bunch of the best films the programmers could get?” (The Hot Blog)  But Anne Thompson thinks the festival offers “something for just about everyone.” (Thompson on Hollywood)

Jared Moshe notices his colleague Eric Kohn’s largely-negative take on the just concluded Tribeca Film Festival, and decides the fest ought to be celebrated for the “relentless populism” that Kohn doesn’t like. “[W]e should embrace the festival for its ability to break outside the film industry bubble to reach artists, bankers, Williamsburg hipster, Upper East Side yuppies, recent college grads in Hoboken and families from Manhattan to Park Slope,” he says. Incidentally, the festival reports that it drew 94,000 visitors to its theater screenings and events, and 410,000 overall.  The capacity rate was more than 95 percent, which suggests that the populism thing worked pretty well for Tribeca.  (indieWIRE)

More festival news: “I Kissed a Vampire,” a musical based on an iTunes webseries, will have its premiere at the Seattle International Film Festival in June. Chris Sean Nolan directed and co-wrote 17 original songs for the film, which is looking for distribution. “Twilight”-meets-“High School Musical” sounds potentially horrifying to me, but that’s not to say that there isn’t a market for it.  (I Kissed a Vampire)

Actor Ryan Gosling will narrate the documentary “ReGeneration,” a film from director Phillip Montgomery that, according to its press release, “explores the widespread cynicism in today’s youth and young adults, and the influences that perpetuate our culture’s apathetic view towards social and political causes." Coming Soon has the release.