In this morning’s roundup of movie news ‘n’ notes from around the web, Quentin Tarantino embraces some Cinema Italiano, while directors’ secrets don’t stay secret.

Kathryn Bigelow may have had jury duty for real right after the Oscars, but her fellow Best Director nominee Quentin Tarantino has volunteered for a panel of a different kind: he’ll head the jury at the Venice Film Festival in September. A release from the festival called Tarantino “one of the major creative figures in contemporary cinema,” in addition to being “perhaps the only American auteur to be adored worldwide like a rock star.” Once upon a time, I suspect that wouldn’t have been considered a plus by a serious European festival. Tarantino has attended the Venice festival and curated sidebars there, but he’s never been on the jury or screened a film in competition. He knows how it works, though, because he chaired the panel at Cannes in 2004, when his jury awarded the Palme d’Or to Michael Moore documentary “Fahrenheit 9/11.” (Venice Film Festival)  In its announcement of Tarantino’s appointment, Variety reports that the films in contention will likely include Sofia Coppola’s “Somewhere,” Monte Hellman’s “Road to Nowhere,” Julian Schnabel’s “Miral” and Francois Ozon’s “Potiche.” (Variety; paywall may engage)  (Below, photo of Tarantino at the 2004 Venice Film Festival by Franco Origlia/Getty Images.) 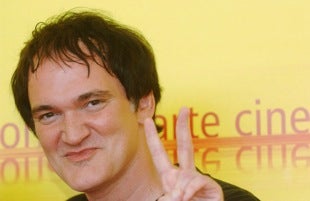 Video-on-demand, streaming and downloads – with distribution tightening for low-budget films but cheaper alternatives expanding, could the new technology help save the independent film business? Not exactly, writes Christine Kearny, who looks at the results of the Tribeca Film Festival’s attempt to acquire and distribute films online and concludes that so far, it’s nowhere near being a game-changer. VOD and internet has generated “meager revenue at best,” says Magnolia Pictures’ Eamonn Bowles, while Tribeca chief Geoff Gilmore points out a key drawback to the new distribution model: “So many filmmakers still want … to be able to walk down that red carpet at a cinema.” In other words, at this point aspiring filmmakers don’t make movies because they want to get on the Internet; they get on the Internet because they want to make movies. (Reuters)

Stephen Saito bemoans the state of a world in which filmmakers can’t make secret projects without websites eagerly revealing the details. And then, in the spirit of “if you can’t beat ‘em, join ‘em,” he goes ahead and reveals all the details he knows about four once-secret projects from Richard Linklater, Steven Soderberg, Casey Affleck and J.J. Abrams. News about the last of those (“Super 8”) has been all over lately, as the trailer is attached to “Iron Man 2.” But the Linklater one has remained pretty obscure, and it sounds fascinating, and a little nuts: apparently the director has been shooting a few days every year since 2001, following a boy from age six through high school. (Independent Eye)

The San Francisco International Film Festival announces its winners, and the recipients of its filmmaker grants.  Lixin Fan’s "Last Train Home," about an annual trek made by Chinese workers, wins the investigative documentary prize, while the documentary feature prize goes to "Pianomania" and the new director award to Pedro Gonzalez-Rubio.  And 10 filmmakers win grants ranging from $5,000 to $50,000.  (indieWIRE)

The Wall Street Journal takes notice of the strong lineup of Asian films at this year’s Cannes Film Festival – 10 of the 37 competing in the two main categories, they say. But they focus on just five of the Asian filmmakers: Apichatpong Weerasethakul (“Uncle Boonmee Who Can Recall His Past Lives”) from Thailand, Lee Chang-dong (“Poetry”) and Im Sang-soo (“The Housemaid”) from Korea, Takeshi Kitano (“Outrage”) from Japan and Wang Xiaoshuai (“Chongqing Blues”) from China. Terminal illness, crime, suicide, betrayal, violence – it’s all here. If you click a link at the end of the piece, you’ll find a much more detailed version. (Speakeasy)

Gus Van Sant has been named this year’s recipient of the Visionary Award, which is handed out annually by the Stockholm Film Festival. He won’t receive the award until November, when the 21st festival will take place. The festival director lauded Van Sant for “his … vision of an alternative America” –a vision which, with a few exceptions (“Good Will Hunting” being the main one), has been embraced more by critics and cineastes than by the public. (Reuters)