In this morning’s roundup of Oscar news ‘n’ notes from around the web, Oscar snubs, loud movies, the sci-fi factor, and former rock writers who love “Crazy Heart.”

The International Documentary Association has announced the nominees for the 2009 IDA Awards. In the running for the feature documentary award are “Afghan Star” (the UK’s entry in the Oscar foreign-language film competition), “Anvil! The Story of Anvil,” “Diary of a Times Square Thief,” “Food, Inc.” and “Mugabe and the White African.” The most high-profile documentary in the Oscar race, Michael Moore’s “Capitalism: A Love Story,” was not entered in the competition; “The Cove” was eligible and was nominated for the Pare Lorentz Award, but not for best feature doc. None of the nominees in the short-documentary category (“The Delian Mode,” “Salt,” “Sari’s Mother” and “The Solitary Life of Cranes”) made the Oscar shortlist, though for my money “Cranes” and especially “Salt” are lovely, hypnotic films that ought to have spurred Oscar voters to expand their horizons beyond the serious, topical, HBO-backed 30-to-40 minute docs that always dominate the category. (International Documentary Association) 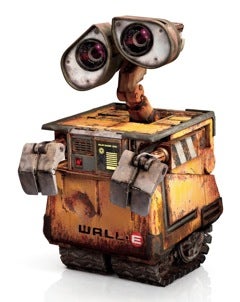 If “Up” doesn’t land that best-picture nomination, this guy’s going to be mad. At indieWIRE, Peter Knegt lists the 50 most despicable Oscar snubs of the decade, and at number one he puts the Academy’s failure to deliver best-picture nominations to the Pixar movies “Finding Nemo,” “The Incredibles,” “Ratatouille” and “WALL-E” (right; Disney/Pixar). His top five also includes the failure to nominate Todd Haynes for best director (for “Far from Heaven” and “I’m Not There”), Uma Thurman for best actress (“Kill Bill,” Vols. 1 and 2), “Eternal Sunshine of the Spotless Mind” for best picture, and “In the Mood for Love” for best foreign-language film. Other notable snubees, he says, include Paul Giamatti, David Cronenberg, “The Dark Knight,” Sacha Baron Cohen, “Gomorra,” “Persepolis” and Tina Fey. Venturing outside Knegt’s focus on the picture, director, acting, screenwriting and foreign-language categories, I’d put the Academy’s failure to nominate Bruce Springsteen for his song “The Wrestler” near the top of the list.

Inspired by an “Avatar” TV ad and a swanky invitation to a big “Star Trek” party at Griffith Observatory on Monday night,Sasha Stone considers “the sci-fi factor.” That basically means she wonders about the best-picture chances for “Star Trek,” “Avatar” and “District 9.” She thinks they should all be taken seriously. (Awards Daily)

James Cameron wins another honor, this one from the Visual Effects Society. He’ll receive the VES Lifetime Achievement Award in February, a week before the Oscar show. The press release announcing the honor points out that Cameron is “so cutting edge he had to wait years for new visual effects technologies to be created in order to move forward with his most recent film, ‘Avatar’…” So they’re saying that he’s an effects pioneer because he didn’t make a movie for 12 years after “Titanic”? Curious logic there. (Shoot Online)

Gerard Kennedy looks at the sound mixing category, and rounds up the usual suspects, most of them pretty loud: “Nine,” “Avatar,” “Up,” “The Hurt Locker,” “Star Trek,” “Transformers,” “Inglourious Basterds,” “District 9” … (In Contention)