And here we all thought we were just waiting to see “Avatar” and “The Lovely Bones” and “Nine” and “Invictus.”

Only days ago, Fox Searchlight was planning to release “Crazy Heart” in 2010. On Tuesday, they sent out a few invites; on Wednesday, they screened it a couple of times. On Thursday, they announced a new release date: December 16.

So now it’s time to join with just about everybody else at those Wednesday screenings, and start lobbying for a couple of guys who ought to be in the thick of the Oscar race.

In director Scott Cooper’s film, Jeff Bridges plays an aging country singer who’s had big hits, but not for years. He’s living on his reputation, on bottles of booze, on the kindness of strangers. He meets a reporter with a young son. Romance, and complications, ensue. 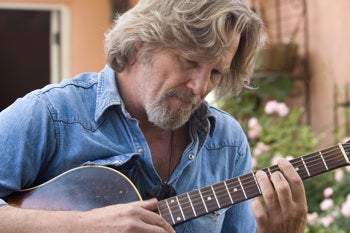 Bad Blake is fiction, from a 1987 Thomas Cobb novel that’s grimmer than the movie. But in Bridges’ hands, Blake is indelibly real. I spent a great number of years writing about music, riding on tour buses, interviewing musicians in fancy hotels and cheap dives. And there is not a single false note in Bridges’ performance.

The guy I saw onscreen is a guy I know. Maybe not under the name of Bad Blake, but under many other names, and in many other guises.

I’ve sat in his living room and watched him strut down the hallway reeking of cologne because he thought a female reporter was coming to interview him. I’ve squirmed through a subsequent conversation that found him constantly yelling at his wife to fetch his bottle of Crown Royal, which she eventually found in the glove compartment of 10-year-old Caddy.

I’ve sat in the back of a car, on the road between Branson, Missouri and an autograph session at a giant fishing supply store, watching him gulp pain pills and complain that record companies and radio stations were no longer interested in what he had to offer.

I’ve ridden through the night between gigs and watched him stab at the dial on the radio and CD player, never letting a song play all the way through because he couldn’t find anything (including his own music) that sounded true enough to stick with.

I’ve spent three days on the road waiting for him to sober up long enough to do an interview, and then gone home empty-handed because he never did.

In “Crazy Heart,” Bad Blake doesn’t do any of those things. But there’s elements of all the guys who did in the character Bridges creates, along with a little bit of Waylon and some Hank Jr. and the essence of every fading badass who’s ever embodied the opening lines of Kris Kristofferson’s “Sunday Morning Coming Down”: “Well I woke up Sunday morning with no way to hold my head that didn’t hurt/And the beer I had for breakfast wasn’t bad so I had one more for dessert.”

Bridges nails all those guys. There is no vanity, no flash in what he does. He’s sweaty and pudgy; he looks awful. The photo above, by Lorey Sebastian/Fox Searchlight, has a gentle Kris Kristofferson/Guy Clark vibe that’s as fetching as he ever gets; most of the time, believe me, Bridges looks like forty miles of bad road after a rainstorm.

In my book, you can’t praise a performance much more highly than by comparing it to Robert Duvall in “Tender Mercies.” But that’s what Bridges in “Crazy Heart” feels like.

I know the best-actor race is crowded. But Bridges has had four nominations, no wins, and a career that defines low-key excellence. I’ve got to think that voters will notice.

And c’mon, do they really want to wait and reward him after he does the Coen Brothers’ new version of “True Grit,” the way they finally got around to saluting John Wayne for the original “True Grit”? That’d be way too much déjà vu. 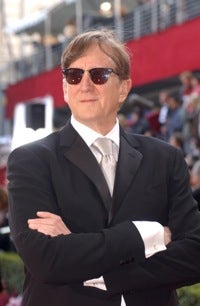 Bridges, by the way, does all of his own singing, trotting out an entirely creditable roadhouse drawl, much of it on songs co-written by the film’s music director and co-producer, T Bone Burnett.  (Right, that’s Burnett at the Oscars in 2004, in a HO/AMPAS photo.)

Burnett’s songs, written with collaborators that include Stephen Bruton, Ryan Bingham and Bob Neuwirth, feel as lived-in as Bad Blake’s jeans; what’s more, you can trace the character’s career in them. Here’s the rough, bluesy material with which he launched his career. Here’s the insanely catchy hit that put him on the map, the albatross he willingly dangles around his neck every night. Here’s the poppier tune that got him airplay once upon a time.

And here, finally, in the form of the haunting Burnett/Bingham song “The Weary Kind,” is the frank ballad of loss that Bad Blake wouldn’t have had the insight to write earlier in his career.

The new material does not sound out-of-place in a film that also contains rough-hewn classics from the likes of Waylon Jennings and Townes Van Zandt; songs like ""Hold On You" and "I Don’t Know" earn their keep, even in a film that sets the bar awfully high by drawing its title from a mournful Hank Williams lament.

As the Bridges character says at one point in the film, a great new song often sounds like something you’ve heard before. These songs don’t sound derivative, but they’ve clearly sprung from the well that has produced great country songs for decades. And like Bridges’ performance, they feel completely authentic.

They do exactly what great movie songs are supposed to do, without drawing undue attention to themselves.

Are you listening, music branch?

“Crazy Heart” is not a perfect movie, and maybe I run the risk of over-hyping it. It is small and modest, not big and bold. I loved the first two-thirds more than the last third. But I walked out smiling, and sure of one thing: