In this morning’s roundup of Oscar news ‘n’ notes from around the web, Vegas lays odds, "A Serious Man" wants consideration, and Michael Jackson wows ‘em at the Academy.

USA Today asks a bunch of heavy hitters what they think of the expanded best picture race. Obviously it’s a story that has been done before, but Susan Wloszcyna gets a good cross-section of interesting people and a variety of opinions, most of which tend toward the negative. (Pro: Pixar’s John Lasseter. Con: Willem Dafoe, Michael Sheen and Jane Campion, whose film “Bright Star” pretty much owes its best-pic contender status to the new rule.) The paper then adds a pretty nifty graphic showing how the best-picture voting procedure will work – and in my book, it’s even niftier because they credit me and theWrap with the explanation on which the graphic is based. 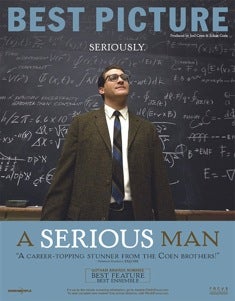 Awards Daily has the for-your-consideration ad for “A Serious Man.”  (Right) Don’t think it’s the first FYC to appear this year, but it’s the coolest one I’ve seen.

David Poland analyzes the race with 20 weeks to go. He doesn’t see much campaigning yet, but he senses that “Avatar” is coming on strong.  He also comes up with a chart of contenders. It will not surprise those who know his history to see that his top pick is a musical, “Nine.” It’s followed by “Up” and “Avatar.”  He originally listed 13 different films as “90 percent locks," which I think means that he gave us 11.7 sure nominees.  Then he changed the heading to "The Frontrunners for Nomination," which is less confusing, mathematically speaking. (Movie City News)

E!Online talks to a Vegas oddsmaker about who’s going to host the Oscars. The oddmaker, Johnny Avello of the Wynn and Encore hotels, gives Billy Crystal the best shot, 5-to-2. After that, in order of likelihood, he has Jon Stewart, Ellen DeGeneres, Chris Rock, Neil Patrick Harris, Tina Fey, Whoopi Goldberg, Steve Martin, Jerry Seinfeld, Stephen Colbert, Steve Carell, and David Letterman bringing up the rear at 50-to-1. It should be pointed out that Vegas odds on Oscar-related stuff are virtually never based on any kind of inside info. It should also be pointed out that Neil Patrick Harris’s highest-profile movie roles have been “Undercover Brother” and a cameo as himself in “Harold and Kumar,” and the guy has already hosted the Tonys and Emmys in the past year. Does anybody really think that the Academy wants to look like they’re following the lead of two other awards shows?

Kris Tapley and Anne Thompson once again talk Oscar. Michael Jackson (he likes it, she hasn’t seen it), the Academy’s music branch (two thumbs down), Oscar hosts (they both likes the idea of Steve Martin and Tina Fey, who are reportedly unavailable), “Precious,” etc. (In Contention) (Thompson on Hollywood)

Dave Karger has the same reaction as I do to the idea of a “This Is It” best-pic nod: Really? (Oscar Watch)

But then Tom O’Neil gets a email from an Oscar voter who says the response to the Michael Jackson movie at the Academy members screening on Sunday afternoon was “the most enthusiastic” the voter has seen in 40 years of AMPAS screenings. He predicts a best-picture nomination. I remain skeptical. (Gold Derby)

Terrence Rafferty doesn’t review “The Lovely Bones,” exactly. But he looks at “a few minutes of footage provided by the studio and an exceptionally handsome trailer,” and tries to put what he sees in the context of Peter Jackson’s entire career. Those few minutes of footage clearly aren’t enough to draw any conclusions about the film’s awards chances. (The New York Times)