In this morning’s roundup of Oscar news ‘n’ notes from around the web, questions, complaints, contenders, calendars and cinematographers.

People are still asking the year’s dominant Oscar question: what will 10 best-picture nominations mean? This time around, Alex Ben Block does the asking; publicists, executives and marketing folks do the answering; and as usually, nobody really knows. (The Hollywood Reporter)

As he always does so endearingly this time of year, Patrick Goldstein puts on his grumpy-elder-statesman hat and complains about (other) Oscar bloggers ruining things by writing dumb stuff. This time he’s grumpy about “hilariously outlandish” best-picture predictions, including Kevin Lewin’s suggestion that “The Informant!” and “Sherlock Holmes” will get nominations, and Tom O’Neil’s suggestion that “This Is It” was such a hit at its AMPAS screening that it’ll land one of the 10 slots. (I hear that it did play extremely well, but I’m not predicting best-pic.) He reserves his meatiest scorn for Lou Lumenick’s admittedly batty prediction of a best-pic nod for “2012" (photo, below: Sony Pictures), though repeatedly misspelling Lumenick’s name doesn’t exactly burnish Goldstein’s credentials as Mr. Authority. (The Big Picture) 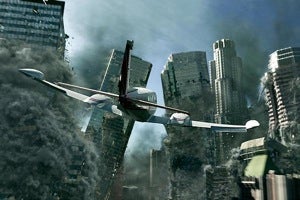 Kris Tapley looks at the best actor category. He mentions 18 contenders, starting with George Clooney (“Up in the Air”) and Colin Firth (“A Single Man”); at this point, Tapley’s predictions are Clooney, Firth, Matt Damon (“The Informant!”), Daniel Day-Lewis (“Nine”) and Morgan Freeman (“Invictus”). (In Contention)

Nathaniel Rogers decides that the Oscar race will kick off this Friday, November 6, when “Precious” is released. He also runs down the release schedule for the rest of the year, and complains about a lot of it. (In general, he’s in favor of opening movies sooner, not later.) (Film Experience Blog)

Nikke Finke says that Ben Stiller and Owen Wilson turned down an offer to host the Oscars. If it’s true, and if the show had a writing staff at this point, those writers would be breathing a sigh of relief – at least the ones who’d been around in the past would, since they’d know that Stiller’s presence on a Oscar show always means continuous, maddening last-minute rewrites. (Deadline Hollywood)

The American Society of Cinematographers will give its ASC Lifetime Achievement Award to Caleb Deschanel. The award will be bestowed on February 27, 2010 at the ASC’s Outstanding Achievement Awards ceremony. An Oscar nominee for “The Right Stuff,” “The Natural,” “Fly Away Home,” “The Patriot” and “The Passion of the Christ,” Deschanel has never won that award. Back in the 1970s, Deschanel was outspoken about the Oscar snubbing Gordon Willis; he’s now a member of the Academy’s board of governors, and was reportedly instrumental in getting Willis his honorary Oscar this year.