In this morning’s roundup of Oscar news ‘n’ notes from around the web, everybody loves the choice of Steve Martin and Alec Baldwin to host the Oscars. Really, everybody.

If there’s one thing you don’t expect from the Oscar blogging community, it’s unanimity. But we appear to have something awfully close to that in the reactions to the Academy’s announcement that Steve Martin and Alec Baldwin will be hosting the 82nd Oscar show. It’s unnerving, even. 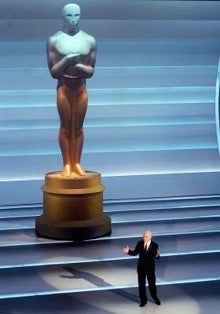 "What’s not to like?" asks Patrick Goldstein.  (The Big Picture)

Jeff Wells is down with it … in fact, he’s “almost excited.” (Hollywood Elsewhere)

Ryan Adams thinks it makes sense and Sasha Stone seem to approve, though you have to look through the comments to find their opinions. (Awards Daily)

Scott Weinberg hasn’t put up a post reacting to the news, but on Twitter he said he’s "pretty f—ing excited." (And the Winner Is)

“Good, solid choices,” says Tom O’Neil, who then goes on to say it doesn’t make sense why they were chosen. (Gold Derby)

Gregory Ellwood, the closest thing to a naysayer in this company, thinks it’s a “very safe choice.” (Awards Campaign)

The New York Times plays it straight … but Timesman and former Carpetbagger David Carr links to the story with a tweet that says “At upcoming Oscars Steve Martin will chew scenery and Alec Baldwin will play banjo.”

There is other awards news out there, too. Variety got the first look at “Disney’s A Christmas Carol,” and Todd McCarthy’s review suggests that this one isn’t likely to be a contender. His first sentence, I have to say, perfectly encapsulates why I think it’s so creepy that director Robert Zemeckis says he plans to use the motion-capture technique on his just-announced sequel to “Who Framed Roger Rabbit”: “Shortchanging traditional animation by literalizing it while robbing actors of their full range of facial expressiveness, the performance-capture technique favored by director Robert Zemeckis looks more than ever like the emperor’s new clothes….”

Emily Blunt has been named the British Artist of the Year by the L.A. branch of BAFTA, the British Academy of Film and Television Arts, which is always said to have significant clout within the Academy by virtue of their presumed tendency to vote en masse for all things British. Good for her, but I can’t imagine this’ll be enough to push her or “The Young Victoria” into any significant role in the Oscar race.