In this morning’s roundup of Oscar news ‘n’ notes from around the web, Jeff Bridges may sing his way into the Oscar race … and could Sandra Bullock join him there?

Blogger battle at the L.A. Times! Tom O’Neil responds to the latest of Patrick Goldstein’s many “awards pundits are ruining the Oscars” columns by pointing out Goldstein’s history of doing exactly what he criticizes other bloggers for doing. (Gold Derby)

Voters in Maine on Tuesday repealed a law legalizing same-sex Oscar hosts, jeopardizing the Academy’s plans to use Steve Martin and Alec Baldwin. At least that’s what Andy Borowitz says. Like everything else he says, it’s a joke. (The Huffington Post) 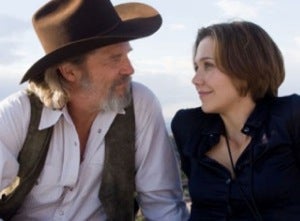 Kris Tapley saw “Crazy Heart” Wednesday morning, loved it, and proclaims Jeff Bridges a strong best-actor contender for his turn as a down-on-his-luck, alcoholic country singer. (In Contention)  He also likes Maggie Gyllenhaal as a young reporter, and T Bone Burnett’s music.  Gregory Ellwood was there, too, and he agrees. (Awards Campaign) As does Anne Thompson. (Thompson on Hollywood)

For the record, I was at the same screening and I’m right there with the rest of ‘em. (But a four-screening day made it impossible to write about it.) I promise to have more to say about the marvel that is Bridges’ understated but indelible performance; for now, suffice it to say that there’s not a false note in it. Memo to Tapley, Ellwood and Thompson: T Bone Burnett may have had trouble making up his mind early in his career, but for quite a while now he’s used neither a hyphen nor a period between the T and the Bone. It’s just a space. But you’re right that he absolutely deserves an Oscar nod or two for the film’s songs.

Vulture ran into Hugh Jackman at a New York party for “Valentino” and broke the news to him that his successors as Oscar host will be Steve Martin and Alec Baldwin. Jackman approves.

Sasha Stone hosts her virtual Oscar roundtable, part three. Complete consensus on two counts: no documentary will be among the 10 best-picture nominees, and ditto for a foreign film. On her other questions (which include “is it good or bad year for movies?” and “should studios show their movies to critics and bloggers early?”), we pundits are all over the place. (Awards Daily)

Pete Hammond suggests that the inspirational drama “Blind Side” might be Sandra Bullock’s “Erin Brockovich” – i.e., the film that will finally win a popular actress critical plaudits and an Oscar, or at least a nomination. I’ll believe it when I see it. (Notes on a Season)