In this weekend’s roundup of Oscar news ‘n’ notes from around the web, France comes on strong, “A Christmas Carol” divides the critics, and biopics both good and bad are scrutinized.

Anne Thompson and Kris Tapley spend their weekly podcast approving of the choice of Steve Martin and Alec Baldwin, lauding Jeff Bridges and “Crazy Heart,” and looking at the potential animated-feature nominees. Kris loves “Disney’s A Christmas Carol.” Anne, who hasn’t seen it, is skeptical. (In Contention) (Thompson on Hollywood)

The European Film Awards nominations have been announced, and the French Oscar entry “A Prophet” leads the pack with six nominations. (That’s Niels Arestrup in the film, below; photo by Roger Arpajou/Sony Pictures Classics.) Joining director Jacques Audiard’s prison drama in the Best European Film category are another Oscar entry, Germany’s “The White Ribbon,” Andrea Arnold’s “Fish Tank” (a 2010 release in the U.S.), and three films that were released here in 2008: the Swedish vampire film “Let the Right One In,” Stephen Daldry’s best-pic Oscar nominee “The Reader,” and the big Oscar winner “Slumdog Millionaire.” (Different eligibility periods and international release dates account for the discrepancy with the Oscar schedule.) 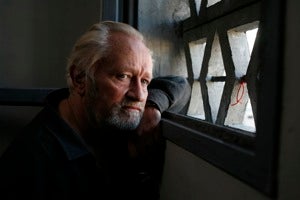 Scott Feinberg updates his predictions to include the week’s hottest newcomer, Jeff Bridges. He also thinks “Avatar” is moving up. (And the Winner Is)

Dave Karger wonders who was the best Oscar host of the century so far. He lists the seven contenders and the total viewership for their shows (in order: Billy Crystal, Steve Martin, Chris Rock, Whoopi Goldberg, Ellen DeGeneres, Jon Stewart, Hugh Jackman), though of course the audience size has more to do with the movies in contention than the host. Karger thinks Crystal is probably “the populist choice,” but his pick for the best is Martin. I agree wholeheartedly. (Oscar Watch)

Studio Briefing looks at the wildly disparate reviews of the Robert Zemeckis film “Disney’s A Christmas Carol.” Yeas: Roger Ebert, the New York Times, the Dallas Morning News. (They could have thrown in Kris Tapley and Sasha Stone as well.) Nays: the Wall Street Journal, the Philadelphia Inquirer, USA Today.

Moviefone celebrates this year’s spate of potential Oscar-bait biographical films (“Bright Star,” “Amelia,” “Coco Before Chanel,” “The Damned United”) by looking back fondly at the worst biopics ever. Their list ranges from Oliver Stone’s “Alexander” to “The Babe Ruth Story,” from Milla Jovovich as Joan of Arc to Fred MacMurray as “Captain Eddie.” It also includes Tony Scott’s feverish “Domino,” which I thought was sorta fun; Kevin Spacey’s “Beyond the Sea,” which wasn’t all that bad; and Jim McBride’s cartoonish Jerry Lee Lewis bio “Great Balls of Fire,” which seemed to posit, as someone involved once said to me, “that the Dukes of Hazzard invented rock ‘n’ roll.” (Winona Ryder was pretty good in it, though. Dennis Quaid most emphatically wasn’t.)

Cinematical looks at Moviefone’s list and add their pick for the five best biopics: “Sweet Dreams,” “The People Vs. Larry Flynt,” “Sid & Nancy,” “Malcolm X” and “Norma Rae.” Me, I’d put Todd Haynes’ Bob Dylan fantasia “I’m Not There” at the top of my list. And that “Raging Bull” movie was pretty good, too. And, um, “Lawrence of Arabia” and “Patton.”