In today’s roundup of Oscar news ‘n’ notes from around the web, Ingmar Bergman goes on the auction block, “Transformers” wins a prize, and the best-actress category needs a babysitter.

Thank heaven for little girls: Guy Lodge notices that many of the top best-actress contenders are young, and playing younger. Saoirse Ronan, Carey Mulligan, Gabourney Sidibe, Abbie Cornish – only the first is a teenager, but the others are in their twenties but playing teenagers. Will they split the youth vote and hand the award to Meryl Streep? Is there a youth vote in the Academy? (In Contention)

The Hollywood Film Festival announced that honors will go to Kathryn Bigelow, Nora Ephron, “Up” and “Transformers: Revenge of the Fallen.” The first three are clearly strong Oscar competitors, Ephron probably more for writing “Julie & Julia” than for directing it. As for that final honoree, it’s worth noting that the festival is giving it the “Hollywood Visual Effect Award,” which I guess is the one area where you can safely give “Transformers” a prize. (Hollywood Film Festival) 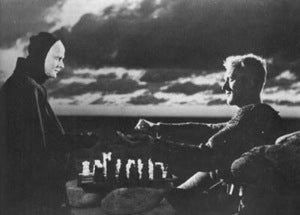 Ingmar Bergman’s possessions are being auctioned off in Stockholm, because the director insisted in his will that he wanted to sell everything off to prevent an “emotional hullabaloo.” The Guardian says that Monday’s nine-hour sale raised about $3.5 million, and the items sold included a chess set believed to have been used in “The Seventh Seal” (left) and Bergman’s Golden Globe awards. The Irving Thalberg Award he received at the 1970 Oscars, or the competitive Oscars won by his films “Fanny and Alexander,” “The Virgin Spring” and “Through a Glass Darkly” can’t be included in the sale because of the Academy’s strict regulations prohibiting resale.

It’s not quite the last-film-out-of-the-box strategy (“Invictus” and “Nine” still have it beat there), but Paramount has bumped “Up in the Air” into December to move it away from “The Men Who Stare at Goats,” the fall’s other George Clooney movie. (Variety)

USA Today says that when Ellen Page was working the awards circuit on behalf of “Juno,” for which she earned a best-actress nomination, she was subdued and stilted. Now, promoting a new movie, “Whip It,” that’s not exactly Oscar bait, she’s having fun.

“Lebanon” didn’t get chosen as Israel’s official submission in the Oscar foreign-language race, but Sony Classics picked it up. Now Michael Fleming says its director, Samuel Maoz, gets a pretty good consolation prize: a deal with ICM. (Variety)