In this weekend’s roundup of Oscar news ‘n’ notes from around the web, George Clooney and Saoirse Ronan are hailed as Oscar contenders … and Clive Owen isn’t.

Gregory Ellwood looks at the best actor race, decides that George Clooney is the only lock, and wonders who else will make the final five. I think he’s underplays Morgan Freeman’s chances (the guy is playing Nelson Mandela in an Eastwood movie!), but in the pros ‘n’ cons format he doesn’t really tip his hand much. (Awards Campaign)

Dave Karger asseses the Oscar chances of this weekend’s releases, “An Education,” “Trucker,” “The Damned United,” “Bronson” and “Good Hair.” As you might have guessed, the first of those ranks highest in his estimation. (Oscar Watch) 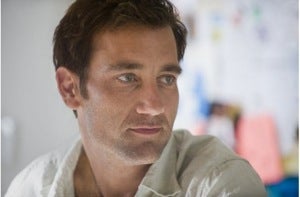 Peter Bart starts to muse on the fate of poor “non-contenders” – i.e., performances that are worthy but “will never stand a chance of winning recognition” – but then just puts Clive Owen in “The Boys are Back” (left) on the top of his list and leaves it at that. (Variety)

Awards Daily considers the chance that the feature animation category will expand to five nominees. Ryan Adams lists 16 2009 releases; if they’ve all been submitted (which we don’t yet know), that’s enough to trigger the move to five nominees. Even if they’re not, it’s possible that four more films, all potentially released before the end of the year, could push the number high enough: “Foodfight!,” “Vanilla Gorilla” and two films in French, “A Town Called Panic” and “The Illusionist.”

By the way, the talk about five nominees presumes that five films will score high enough when they’re rated by the Academy’s Animated Feature Film Award Screening Committee. This is another of the categories in which a film must average a minimum score (in this case, 7.5 out of 10) to qualify for a nomination; if only three films score high enough, for example, you’ll only have three nominees no matter how many films were submitted. The applicable rule is here. (Academy of Motion Picture Arts and Sciences)

All These Wonderful Things has the most comprehensive look I’ve found at the eight documentary-short finalists.

More Oscar Talk from Kris Tapley and Anne Thompson. They talk about possible Oscar hosts (she still loves Steve Martin, he lobbies for Kevin Spacey), then argue about whether it’s been a strong year for best-actress candidates (he said) or a weak one (she said). (Thompson on Hollywood) (In Contention)

Dublin-based newspaper the Herald says that “critics and bloggers alike are pushing” for 15-year-old Irish actress Saoirse Ronan to receive her second Oscar nomination for “The Lovely Bones.” I think they mean “predicting,” not “pushing,” since I’m pretty sure no critics and/or bloggers have seen the film yet. As for the headline (“’Spooky’ Saoirse has her Oscar rivals running scared”) — hey, I think the young Ms. Ronan was terrific in “Atonement” and probably will be in “The Lovely Bones” as well, but I doubt Meryl or Carey are shaking in their boots quite yet.