Anne Thompson on “Where the Wild Things Are”: “exquisitely beautiful, magical … a tad dull.” Her assessment – which also suggests that the movie will play best to “really young kids,” and that its high budget will prevent it from turning a profit – upsets some of her readers, two of whom call her an idiot in the comments section of her blog. (Thompson on Hollywood) 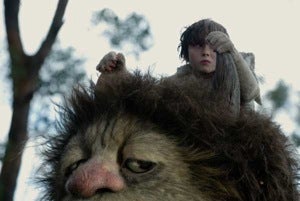 Variety more or less agrees with Thompson: imaginative and vibrant, but it eventually bogs down and has an uncertain commercial future. So does the Hollywood Reporter. But A.O. Scott and Michael Phillips, the new hosts of “At the Movies” – imagine, film critics with credibility and smarts on TV! – both love it. As does Drew McWeeny at HitFix. In New York magazine, meanwhile, the headline borrows a title from screenwriter Dave Eggers, and tips David Edelstein’s hand (with a little overstatement): “A Heartbreaking Work of Staggering Genius.”

Speaking of respected directors born in 1969 making new films from well-loved children’s books … the Guardian has a new Jarvis Cocker song that’ll be in Wes Anderson’s “The Fantastic Mr. Fox.” The whole thing “isn’t approved for streaming” in the U.S., but you can hear enough to give you an idea of what it’s like: jaunty, with a prominent banjo, some sproingy noises, and lyrics full of “diddle-dees” and “doodle-dums.” Probably not really the kind of thing the Academy’s music branch is looking for.

Those of us who love “An Education” tend to burble so enthusiastically over Carey Mulligan that we sometimes overlook the other worthy folk who ought to be mentioned. Vanity Fair helps correct that by talking to the costume designer about the sartorial metamorphosis of Mulligan’s character.

In the Washington Post, Neal Karlen says the Coen Brothers are “just a couple of mensches from the old neighborhood.” The neighborhood in question is St. Louis Park, Minnesota, the heavily Jewish suburb where the Coens, and Karlen (and Al Franken, among others) grew up, and where “A Serious Man” is set. He has plenty of stories about the town, and the movie, including the fact that the Coens ran the script for film’s prologue by Karlen’s 83-year-old father to see if he thought it was better than the complete rewrite done by actor Fyvush Finkel. (He did.)