In this morning’s roundup of Oscar news ‘n’ notes from around the web, more observers weigh in on the hunt for an Oscar producer, and the trades argue about “Amelia.”

The Hollywood Film Festival and Hollywood Awards keep adding to their extensive array of awards, announcing a new honor for Christoph Waltz, a strong supporting-actor Oscar candidate for “Inglorious Basterds.” The Festival also boosted the profile of a handful of foreign films by announcing five nominees for its “Hollywood World Award”: “Bright Star,” “I Am Love,” “Lourdes,” “A Prophet” and “The White Ribbon.” The last two have been submitted for the Academy’s foreign-language race, and will likely make the shortlist of nine even if they’re too tough for some voters. (The Festival is also reaching well outside Hollywood to honor Father Rick Frechette, a priest who’s been working to provide medical care to poor children in the Caribbean and around the world.) (Hollywood Film Festival) 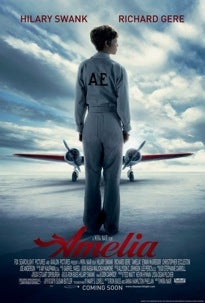 The first reviews of “Amelia” are in. Variety’s pan supports the view of those who figured that the scarcity of screenings probably meant the movie just wasn’t good enough to be a strong awards contender: Todd McCarthy begins with the line, “To say ‘Amelia’ never gets off the ground would be an understatement; it barely makes it out of the hangar.” On the other hand, the Hollywood Reporter backs the revisionist view, which began to surface last week, that the screening delay was simply due to the fact that a very good movie wasn’t finished yet: Ray Bennett calls the film “an instant bio classic” and predicts Oscar heat.

Anne Thompson has seen it too, but she doesn’t tip her hand because she’s interviewing the writers after hosting a screening this week. (Thompson on Hollywood)  In the New York Times, meanwhile, David Carr writes about Amelia and “Amelia.” No review, just conversations with Hilary Swank, director Mira Nair, etc.

Thompson also talks to the Academy’s Bruce Davis about the conspicuous absence of an Oscar show producer at this point. The Academy definitely wanted to have a producer in place by now, but Davis nonetheless manages to sound amiable and unconcerned. She tosses out the usual suspects (Spielberg, Roth, Cates … ) and gets this out of Davis: “It could be anybody.” (Thompsom on Hollywood)

Nikki Finke, who usually hates all things Oscar, also tackles the no producer/no host story, and gets through it without taking a single potshot at Tom Sherak. She says that she’s been told that AMPAS “is about to check on the availability of Hugh Jackman to host” again – a move that would mark a complete change of procedure, since the show’s producer always makes those overtures after consulting with the Academy. (She says that “people around Jackman” will recommend he not host again.) But then she says that the host won’t be announced until after the Academy has chosen the producer, “who has final say over everything to do with the telecast.” Let’s get this straight: the producer has final say over everything, but the Academy is going to try to line up a host without him (or her)? (Deadline Hollywood)

At Variety, Peter Bart and Michael Fleming discuss a few mostly business-related topics (it’s not actually a discussion; more of an “I’ll write a paragraph giving my opinion, and then you write one giving yours” kind of thing), starting with their takes on the expanded best picture category. Bart thinks the 10 nominations might include one mainstream film; Fleming compares it to restructuring the baseball playoffs to admit one wild-card team. I suspect, though, that a wild-card team wins the World Series a lot more often than a “wild-card nominee” will win best picture. (BF Deal Memo)