In today’s roundup of Oscar news ‘n’ notes from around the web, a Swedish auction house conclusively proves that it’s better to be nominated for an Oscar than to win a Golden Globe.

More on that sale of Ingmar Bergman’s belongings in Stockholm earlier this week: it turns out that while the Bukoswkis auction firm couldn’t legally resell Bergman’s Oscars, they did auction off three of the Academy Award nomination plaques he received for his films “Wild Strawberries,” “Through a Glass Darkly” and “Autumn Sonata.” Of the nearly four dozen trophies, awards and certificates in the auction, the “Wild Strawberries” nomination plaque (below) drew by far the highest price, about $14,000. His two Golden Globe statuettes, by contrast, went for about $6,000. None of the awards prices approached the $142,000 paid for a chess set probably used in “The Seventh Seal” – but the figures do suggest that it’s not just in Hollywood where an Oscar nomination is worth more than a Golden Glove victory.  (Bukowskis Fine Art Auctioneer) 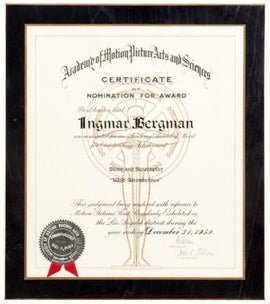 Sasha Stone looks at how the Oscar contenders are doing on the sites that aggregate reviews. Claire Denis’ “35 Shots of Rum,” not a realistic Oscar player, gets the top score at Metacritic, followed by “The Hurt Locker.” “The Hurt Locker,” “Inglourious Basterds” and “A Serious Man” are the leaders at the Broadcast Film Critics site. And Rotten Tomatoes puts “The Hurt Locker” on top, followed by “Up” and “District 9.” What does it mean? It means Oscar voters absolutely can’t ignore “The Hurt Locker.” (Awards Daily)

Six new high-resolution stills from James Cameron’s “Avatar” have been released. Sci-fi fanboy movie or emotional mainstream across-the-board smash? I’m leaning toward the former, but that’s nothing but a guess. (Filmshaft)

Tom Ortenberg, the longtime Lionsgate exec largely credited with masterminding the upset best-picture win for “Crash” by sending out more than 100,000 screeners, left his brief stint at the Weinstein Company last week and formed a new company, One Way Out Media, this week. One of the areas the firm will be handling, the press release says is “awards season.” (One Way Out Media)