In this weekend’s roundup of Oscar news ‘n’ notes from around the web, pundits offer advice on how to wage an Oscar campaign and how to save the show.

At the L.A. Times, Mary McNamara (who once wrote a novel set around the Oscars) offers the new producers seven ideas to help the show. Many of them have to do with making the Oscars more like the Emmys. (McNamara’s day job is as a Times’ TV critic, after all.)  I have a little trouble embracing her idea for an Academy Award show that uses Doogie Howser to host and includes appearances by the stars of “True Blood” and a dance number incorporating the “Transformers” robots, but maybe that’s just me. 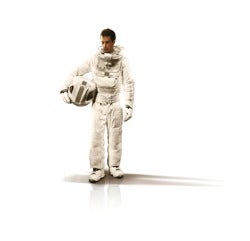 Sasha Stone looks at the almost-certainly-doomed internet campaign to land a best-actor nomination for Sam Rockwell in “Moon,” and comes up with five ideas on how to run an effective Oscar campaign. Her basic take: be subtle, use reverse psychology, and leave it to the pros. Oh, and longshots fare better in the actress categories than the actor ones. If true, her rules do not bode well for Mr. Rockwell (right). (Awards Daily)

Jeff Wells reads Stone’s thoughts and begs to differ on a few points, based on his belief that most people are lazy,timid and out-of-touch. Regular readers of Hollywood Elsewhere have heard this a few times before.

Tom O’Neil names 12 front-runners for the 10 best-picture slots. His list includes eight films he’s probably seen, and four he probably hasn’t (those being “Avatar,” “Invictus,” “The Lovely Bones” and “Nine”). Though his list is for the most part the usual suspects, he goes out on a few limbs: “Inglorious Basterds,” for instance, makes his front-runners list while “A Single Man” doesn’t. And on his lists of “possibilities” and “long shots,” he deems “The Hangover” a likelier nominee than “Bright Star.” (Gold Derby)

Kris Tapley and Anne Thompson spend half an hour discussing “Amelia” (“fake…very dull…a big so-what”), “Precious” (“one of the best pictures of the year, but I am not rushing out to see it again”), Sony Classics’ glut of awards-season releases, and a handful of other things. (In Contention) (Thompson on Hollywood)

Guy Lodge says he’s going to put the French Oscar submission, “A Prophet,” on his top 10 of the year list. (In Contention)

Helen Mirren wins the best actress award for “The Last Station” at the Rome Film Festival. When you’re laying the groundwork for an Oscar campaign, every little bit helps. (Screen Daily)

Michael Haneke, the director of the stylish and disturbing Germany foreign-language entry “The White Ribbon,” among other films about the malice that dwells in the human heart, tells the Observer, “I’m a very bad person.” He says this while smiling and eating sliced pineapple.

Dave Karger takes his usual look at the Oscar changes of the weekend’s releases. He tackles only one release, “Amelia” … and, not surprisingly, says its Oscar chances are very, very limited. (Oscar Watch)