In this morning’s roundup of Oscar news ‘n’ notes from around the web, debates about new Globes host Ricky Gervais, and debates about the commercial and awards prospects for “Precious.”

Patrick Goldstein inexplicably treats the Golden Globes’ choice of host Ricky Gervais, who seems to be a good fit for that show, as a brilliant coup that shakes the Oscars to its core. As if hiring a British comic best known for the American TV version of one of his shows would ever have been a real option for the Academy … (The Big Picture) 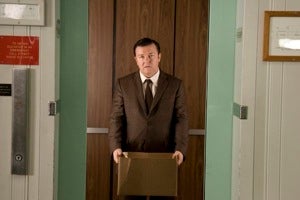 Elsewhere under the L.A. Times umbrella, Tom O’Neil rather more sensibly thinks Gervais is a perfect choice for the Golden Globes but an unlikely Oscar host … unless he boosts his profile by doing a great job for the Globes. (Even then, the institutional anti-Globes bias inside the Academy would probably prevent them from hiring Gervais for at least a couple of years.) (Gold Derby)

Joe Leydon wonders if the Hollywood Foreign Press Association knows what they’re getting into by hiring Gervais. He offers video proof that they might not. (Moving Picture Blog)

MSNBC, meanwhile, picks people they think should host the Oscars: Neil Patrick Harris (too TV), Gervais (taken), Tina Fey (again a TV star, though she has starred in and written films), the team of Quentin Tarantino and Martin Scorsese (how would anybody else ever get a word in edgewise?) and Queen Latifah (who probably has the best chance of anyone on the list, considering her role in Oscar producer Adam Shankman’s “Hairspray”).

Does mainstream success beckon for “Precious”? Eugene Hernandez wonders. And decides that it could, but nobody knows. (indieWIRE)

And Anne Thompson wonders if “Precious” star Mo’Nique has the inclination to do the kind of glad-handing often useful and sometimes even necessary to win an Oscar nomination. She wonders the same about “Bright Star” actress Abbie Cornish, who was in L.A. last week doing lots of interviews. Then she laments the fact that the British documentary “The Age of Stupid” doesn’t have the money for any kind of campaign. I’ll go with her on her first two case studies, but the documentary category is a whole different animal: at every stage of voting, the docs are scored by committees who have to see every eligible film, so raising your profile is far less crucial. (Thompson on Hollywood)

Over at In Contention, we have a disagreement. Kris Tapley loves “Precious” and thinks it’s the current best-picture frontrunner. Guy Lodge chimes in from London to say that he found it “garish and occasionally condescending.” Tapley disagrees but gives Lodge props for honesty.

Four staffers at the Envelope make best-picture predictions. “Invictus,” “The Lovely Bones,” “Precious” and “Up in the Air” go four-for-four; “Avatar,” “The Hurt Locker,” “Nine,” “The Road” and “Up” score three votes each. The Coen Brothers don’t get much love, with “A Serious Man” only scoring a single vote. (Gold Derby)

At a Q&A session that followed a screening of the new film “Gentlemen Broncos,” Sam Rockwell was asked about the online campaign that “Moon” director Duncan Jones has launched to win the actor a best-actor nomination. "Well, you know, dreams are nice,” said Rockwell. “ It’s … very, very flattering.” (Cinematical)