In this morning’s roundup of Oscar news ‘n’ notes from around the web, an ingénue takes on a legend, Ricky Gervais plans to get drunk, and Clint Eastwood unveils a bit of “Invictus.”

Stand in the sun (or the rain) on your assigned spot for hours waiting for stars to show up! Shout “Who are you wearing?” to famous people as they hustle by you on their way to talk to Ryan Seacrest! You too can get a press credential for the red carpet at the upcoming Oscar show, if you’re a college journalist, and if you submit a two-minute video explaining why you deserve the gig, and if the Academy picks you. AMPAs and mtvU, MTV’s college network, are sponsoring the contest for the second year. The rules and entry form are here. 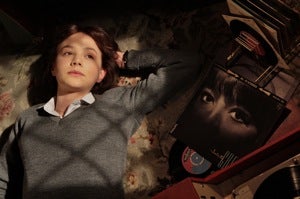 Scott Feinberg looks at the best actress race between Meryl Streep and Carey Mulligan – whom he calls the only two locks in the category – and concludes that historically, a best-actress Oscar contest between a respected vet and a “pretty youngster” almost always goes to the youngster. He trots out 10 examples, though some are a stretch, to put it mildly: Kate Winslet was hardly an ingénue when she won for “The Reader” (it was her sixth nomination over a period of 13 years); Julia Roberts was an established star who dominated the race in 2000 and never really faced a challenge from Ellen Burstyn; and Elizabeth Taylor’s 1960 win for “Butterfield 8” had much more to do with sympathy over her recent health troubles than any perception of the four-time nominee as a hot newcomer. I love Mulligan and am rooting for her, but I wonder if her performance, and her film, are too quiet to go all the way. (Mulligan photo: Sony Pictures Classics) (And the Winner Is … )

The Santa Barbara Film Festival, which rounds up a passel of Oscar contenders and honors them every year just after Sundance, tabs Colin Firth in “A Single Man” for the Outstanding Performance of the Year award. Presuming he’s an Oscar nominee when the festival rolls around – as Santa Barbara’s honorees usually are – it’ll be a nice little boost in the middle of the voting period. (indieWIRE)

David Poland lashes back at the talk of a “Precious” backlash, which he points out is rather silly since the film hasn’t even been released yet and the “backlash” is one group of writers responding to another group of writers independent of any public verdict on the film. Judging from the Tuesday night “Precious” screening that kicked off theWrap Screening Series, I’d say that director Lee Daniels comes across as friendly, charming and entertaining – and certainly not like a guy who could hurt himself by being too outspoken, as Patrick Goldstein recently opined. (The Hot Blog)

Ricky Gervais tells Reuters that he plans on drinking a lot and not rehearsing for his hosting gig at the Globes. If only.

Clint Eastwood has finally unveiled a little peek at “Invictus,” in the form of a trailer. Some people seem to love it, but it seems a bit by-the-numbers inspirational to me until the undeniable South African music kicks in near the end.