In this morning’s roundup of Oscar news ‘n’ notes from around the web, Anjelica Huston touts a masterpiece, and pundits agree on Clint Eastwood and “Precious.”

At Gold Derby, Tom O’Neil keeps polling pundits and putting up predictions. Two new charts go up on Thursday: Thelma Adams, Kevin Lewin, Richard Rushfield, Jeff Wells and Susan Wloszczyna are here, while Erik Davis, Scott Feinberg, Dave Karger, Peter Travers and yours truly are here. So far, two films have been named by all 14 of the folks O’Neil has polled: “Invictus” and “Precious.” My three comments to O’Neil when I sent in my picks were that I don’t trust “Avatar” but I’m afraid not to list it; I have big doubts about “Inglorious Basterds” but it’s one of my picks anyway; and I refuse to put a musical on the list until I’ve seen it, hence no “Nine.” 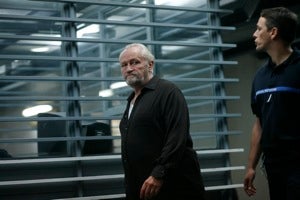 Three films in the Oscar mix get boosts from the London Film Festival. The French entry, “A Prophet,” takes home the festival’s top prize, with jury chair Anjelica Huston calling it “a masterpiece [with] the ambition, purity of vision and clarity of purpose to make it an instant classic” – so if the prison drama is too dark to win favor among the first-round voters, expect the Academy’s executive committee to put it on the shortlist.   (Right,  Niels Arestrup in "A Prophet."  Photo by Roger Arpajou/Sony Pictures Classics) The Israeli submission, “Ajami,” won the award for the most original and imaginative first feature, while “The Road,” a contender but not one of the favorites for a best-picture nod, was given a special mention by the jury. (The Wrap)

Variety kicks up its awards coverage with a package of stories, including one headlined “Oscar Hopefuls Launch Viral Campaigns.” But does one high-profile but longshot campaign – “Moon” director Duncan Jones’s push on behalf of his lead actor, Sam Rockwell – merit a trend piece that doesn’t really offer many other examples beyond Ashton Kutcher’s tweets and the Twitter activity on behalf of the documentary “We Live in Public”? It’d be more persuasive if Variety could point to any true contenders with significant online presence.

More “Avatar” video emerges. This time, it’s a featurette about the making of the film. “It’s not just a movie, it’s a universe.” (Cinematical)

Gregory Ellwood is certain that the Oscar for best supporting actress will go to either Mo’Nique for “Precious” or Anna Kendrick for “Up in the Air.” (I’ll go with him on the former but am skeptical about the latter.) But he’s not sure who’ll get the other three nominations. A slideshow of 17 possibilities ensues. (Awards Campaign)

Eric Childress looks at the best-picture contenders, predicts ten, but quite sensibly warns his last few picks (“The Informant!”, “Where the Wild Things Are” and “Public Enemies”) that their days on the list might be numbered, since he won’t include the likes of “The Lovely Bones” and “Invictus” until he’s seen them. (eFilmCritic.com)

An Oscar for Tennessee Williams for a script he wrote in the 1950s? Pete Hammond asks if that outcome is in the cards for the late playwright, whose script “The Loss of a Teardrop Diamond” was made into an independent movie with Bryce Dallas Howard that’ll open an Oscar-qualifying run in late December. He also looks at Richard Linklater’s “Me and Orson Wells,” which’ll be part of theWrap Screening Series on November 16. (Notes on a Season)

Australia’s foreign-language Oscar entry, “Samson and Delilah,” picks up 11 nominations at the Australian Film Institute Awards. The one film that gets more, 14, is “Balibo,” a gritty drama about the murder of five Australian journalists during the Indonesian takeover of East Timor in 1975. (The Australian)