In today’s roundup of Oscar news ‘n’ notes from around the web, Nick Hornby and Michael Moore educate, and we learn all the ways in which Michael Jackson can’t win a posthumous Oscar.

With a new novel just out, screenwriter Nick Hornby hasn’t been as visible on the promotional trail for “An Education” as the film’s cast and director. But he talks (briefly, it seems) to the Wall Street Journal about making the Peter Sarsgaard character less creepy, and initially thinking Carey Mulligan was too old for the lead role. He changed his mind about that last one, obviously. (Sarsgaard photo, below, by Kerry Brown/Sony Pictures Classics) 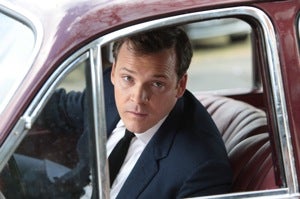 Pete Hammond asks if Michael Jackson can win a posthumous Academy Award for the documentary “This Is It.” Well, that’s what his headline asks, anyway. The story itself explains that the film is opening too late to be eligible in the documentary category this year. And that music films almost never get nominated. What goes unsaid is that Jackson isn’t the film’s director or producer, so he couldn’t win anyway. In other words: never mind, it’s a moot point. (Notes on a Season)

Michael Moore tells USA Today that he’s not doing this alone anymore. And that he’s a churchgoing patriot who’s sad that “good people” won’t see his films because of the lies that have been spread about him.

Anne Thompson looks at "A Serious Man," "An Education" and Roman Polanski, and concludes: "Jews are popping up all over."  (Thompson on Hollywood)

The Daily Beast talks to, ahem, “six influential Hollywood pundits” about the Oscars. The six of us try to say things that won’t make us look stupid four months from now.