In today’s roundup of Oscar news ‘n’ notes from around the web, Meryl Streep and Carey Mulligan get competitive, Robert De Niro gets a boost, and a blogger gets testy.

Kris Tapley assesses the state of the best actress race. He thinks Helen Mirren (“The Last Station”) is a real player, Hilary Swank “Amelia”) is fading, and Meryl Streep (Julie and Julia”), Carey Mulligan (“An Education”), Gabourney Sibide (“Precious”) and Marion Cotillard (“Nine”) will be the nominees … though he’s not so sure about Cotillard. His In Contention Colleague Guy Lodge then spotlights another aspect of the race, and gives the edge to Mulligan over Streep because the British contingent of AMPAS will go for the Brit, and because Streep’s performance relies on a viewer’s familiarity with the real Julia Child, which many English people just don’t have. Straying off-topic and into an adjoining category, it occurs to me that this may be the same thing that’s keeping Michael Sheen out of the crowded best-actor picture: most of us Yanks have no idea who soccer manager Brian Clough is, so we come to “The Damned United” with no frame of reference or appreciation of what Sheen is doing. 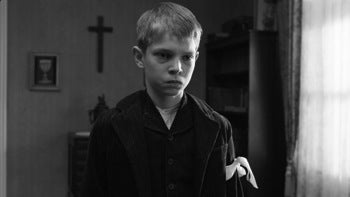 Lodge also looks at the foreign-language film race, in which submissions were due last week. (The complete list of qualifying films generally isn’t released for another couple of weeks – not because of late submissions, but because the foreign-language committee goes through a vetting process to make sure all the submitted films are eligible.) Lodge and Tapley have both left the most acclaimed foreign film of the year, Michael Haneke’s “The White Ribbon,” off their list of predicted nominees, figuring it’s a bit too tough for the category’s nominating voters. I think it’s almost guaranteed a spot on the shortlist of nine, but it’s awfully hard to talk in certainties in the categories where voters actually have to see all the contenders before voting. (Photo of Leonard Proxauf in “The White Ribbon” copyright Films du Losange, courtesy of Sony Pictures Classics)

More Oscar contenders are added to the lineup at AFI Fest in November: the Robert De Niro film “Everybody’s Fine,” and Israel’s controversial Oscar selection “Ajami,” which will join the Romanian and Canadian selections, “Police, Adjective” and “I Killed My Mother.” (Screen Daily)

Not to be outdone in the give-De Niro-a-boost sweepstakes, the Hollywood Film Festival announces that it’ll be giving its “Hollywood Actor Award” to the actor at a ceremony on October 26. The press release calls his performance in “Everybody’s Fine” “outstanding and flawless.” (Hollywood Film Festival)

Pete Hammond talks about the selection of films screening for AMPAS members at the Academy’s Samuel Goldwyn Theater. He mentions that one member asked him for advice on which of the upcoming films she should see. This really bothers Movieline’s S.T. Van Airsdale, who seems upset less than the member is asking Hammond for advice than that she’s not asking Van Airsdale. Then Sasha Stone points out how silly the whole spat is. The fact is, even though the Goldwyn is one of the biggest theaters in Los Angeles – and even though the reaction there can sometimes give a clue about a film’s Oscar chances – the vast majority of Academy members see the contenders at other theaters or on screeners. (Notes on a Season) (Movieline) (Awards Daily)

/film has the first five minutes of Disney’s animated film “The Princess and the Frog,” which will be fighting to get into the three-film slate in the unusually competitive category of best animated feature.

My favorite Oscar-sage quote of the week is Awards Daily’s Sasha Stone on “An Education”: “there is no denying the shimmering creature at the heart of it.”