In today’s roundup of Oscar news ‘n’ notes from around the web, more foreign films come to the Academy, Peter Sarsgaard faces a choice … and have we found the next Oscar host?

A couple of weeks after the last Oscar show, former Academy president Frank Pierson screened a classic film he wrote, “Cool Hand Luke,” for members of the creative community in Iran, as part of a trip to that country by an Academy delegation that also included then-president Sid Ganis and actresses Annette Bening and Alfre Woodard. In a couple of weeks, 10 Iranian filmmakers will return the favor, coming to the Academy to show off their own work in an AMPAS-hosted series of screenings and discussions. Ganis kicks things off with a panel discussion after a screening of “As Simple as That”; Woodard wraps things up a week later by hosting a program that includes a screening of “Gilaneh.”  (AMPAS) 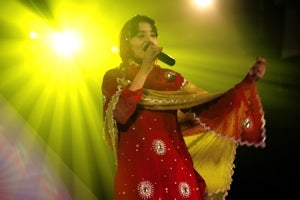 It’s a documentary, by a London-based director, about a television show in Afghanistan. So naturally, it’s competing in the Academy’s foreign-language film category, as the official submission of an English-speaking country. “Afghan Star,” the movie in question, is the United Kingdom’s official submission and latest entrant to be revealed, five days after last Thursday’s deadline for submissions. (Countries had to send their entries to the Academy by October 1; there’s no rule about when they have to tell the press about it.) The UK has been nominated twice in the past, both times for Welsh films; “Afghan Star,” because it’s not set in the UK and not in an official language of that country, is more analogous to Canada’s 2006 nominee “Water,” a Hindi-language film made by a Canadian filmmaker but set in India. (Photo: Lima Sahar in “Afghan Star,” Zeitgeist Films) (Official site)

Columbia’s entry was also revealed this week: it’s “The Wind Journeys,” an acclaimed film about a one-time traveling musician and a teenager journeying across northern Columbia. “Literally breathtaking,” said the Mcleans.ca website.

Scott Feinberg addresses a question facing “An Education”: promote Peter Sarsgaard for best actor or best supporting actor? He lists lots of reasons why the latter is the right move: it’s the only category where Sarsgaard has a chance, he qualifies because it’s Carey Mulligan’s movie, the Academy likes to reward sizable roles in the supporting categories … I agree wholeheartedly: Sarsgaard’s is a subtle, seductive performance that gets even better on a second viewing, and a legitimate supporting turn to Mulligan. Plus, let’s face it: the guy really doesn’t have a shot at breaking into the best actor category. Let’s hope this one is a no-brainer for Sony Classics. (In Contention)

“Coraline” director Henry Selick, obviously a strong contender in the animated-feature category, leaves Laika, the animation company with which he made the movie. The Oregonian gets the story. Anne Thompson follows up and compares Selick to James Cameron: “always pushing the technological limits of his art while demanding a lot of the people around him.”

After the record-breaking ESPN ratings for Monday night’s Vikings-Packers football game, Kris Tapley advances a modest and thoroughly tongue-in-cheek proposal: Minnesota quarterback Bret Favre should host the Oscars, or at least be a presenter. I kinda hate the guy after all that retiring/unretiring nonsense, but he sure knows how to rise to the occasion … and hey, he had a nice cameo in “There’s Something About Mary,” which gives him stronger movie-biz credentials than past hosts David Letterman and Johnny Carson. (In Contention)