In today’s roundup of Oscar news ‘n’ notes from around the web, Oscar’s animated-feature category becomes a numbers game, and Carey Mulligan gets a Hollywood education.

Pete Hammond points out that there might actually be five nominees in the animated feature category this year, for only the second time in the category’s nine-year existence. Before I wrote about the unusually competitive category two days ago, I’d been told by a couple of people working on campaigns that it’d likely be a three-nominee year, with fewer than 16 films submitted to the Academy. Since then, I’ve heard that the number might actually be big enough to trigger the jump to two additional nominees; one Oscar publicist’s list of possible entries, in fact, now includes 19 different films, from the February release "Coraline" (below) to the TBA "The Illusionist."  If enough films qualify for a slate of five nominees, that’ll provide the best odds of any Oscar category, with more than 25 percent of the qualifying films receiving nominations. (In the best picture competition, by contrast, less than two percent of eligible films are nominated; in the documentary shorts category, which offers the second-best odds, the rate of success is usually around 15 percent.) (Notes on a Season) 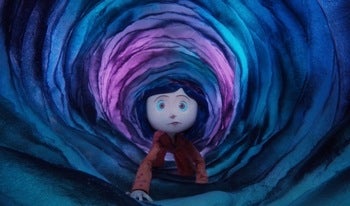 On the Hot Blog, David Poland sits down for a “Super Movie Friends” video chat with journalists Emmanuel Levy and Pablo Villaca, who give advice to “Disgrace” writer-producer Anna Maria Monticelli on how to get her movie, and its star John Malkovich, noticed in the Oscar race. The sequence in which Levy talks to Villaca at the same time that Poland is talking to Monticelli puts Robert Altman’s use of overlapping dialogue to shame.

Anne Thompson passes along “digital consultant” Chris Dorr’s explanation of how “Bright Star” could be marketing itself better online. His advice: director Jame Campion should blog; she should have launched the film’s MySpace, Facebook and Twitter pages earlier and posted more often; and she should go to theaters where the movie is playing after telling her fans that she’ll be there. The idea, he insists, is to sell the Jane Campion brand, not the “Bright Star” brand. (Thompson on Hollywood)

This week’s Oscar queen, Carey Mulligan, talks to the L.A. Times about her acting “Education,” and about getting around Los Angeles by foot. Turns out it’s murder on those Prada flats.

Kris Tapley, by the way, thinks David Letterman totally spoiled “An Education” last night during Mulligan’s appearance. I don’t think he spoiled it; I think he was way too vague and confused to do that. I just don’t think he sold it very well.

(CORRECTION: In the initial version of this column, Anna Maria Monticelli’s name was misspelled.)