In today’s roundup of Oscar news ‘n’ notes from around the web, the first screener is in the mail, and here’s a shocker: Oscar winners often go on to make bad movies.

Pete Hammond sizes up “Anvil: The Story of Anvil” to see if the little-movie-that-could mantle formerly worn by the likes of “Juno” and “Little Miss Sunshine” fits the rock doc. He concludes that it probably doesn’t, given the Academy’s aversion to rock ‘n’ roll. But this week the film becomes the first 2009 screener to land in AMPAS mailboxes – and there’s no denying that the story of “The Story of Anvil” is a terrific one that could help sell the picture to viewers who’d otherwise recoil from long-haired Canadian metalheads. (Notes on a Season) 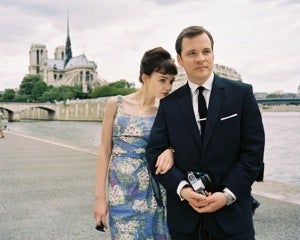 Tom O’Neil wonders if Carey Mulligan reminds everybody of Audrey Hepburn. In those scenes from “An Education” where the film tries hard to make her look like Hepburn, of course she does. Otherwise, not so much. (Photo of Mulligan and Peter Sarsgaard by Kerry Brown/Sony Pictures Classics) (Gold Derby)

News flash: Actors who win Academy Awards often go on to make lousy movies! The Envelope assembles the visual evidence, all of it drawn from the last 25 years. Guess they forgot about the very first best-actor winner, Emil Jannings, who followed his 1927/1928 victory by making “The Patriot,” in which his voice was dubbed by somebody else, and the exploitation flick “Fighting the White Slave Traffic.” Slumming it after winning the Oscar is a time-honored tradition, people! (The Envelope)

The Weinstein Company moves “Nine” to a limited December 18 release, and a wider one on Christmas day. Harvey always did like having one of the last films out of the gate, though the strategy has failed (“Cold Mountain”) as often as it’s succeeded (“The Cider House Rules”). (Rope of Silicon)

Gerard Kennedy considers the best sound editing category and spotlights about a dozen contenders, from “District 9” and “Inglourious Basterds” to “Avatar” and “Sherlock Holmes.” It’s all geek to me. (In Contention)

Josh Spiegel advances a modest list of movies he thinks should have won the Oscar but didn’t. Some, like “Raging Bull,” are expected. (Alas, poor “Ordinary People,” forever dumped on because it had the temerity to beat Scorsese’s classic.) Others are, in my book, unassailable: you’re damn straight “Dr. Strangelove” is better than “My Fair Lady.” His last one is just weird: he names “The Godfather, Part III,” but only because he thinks cinematographer Gordon Willis deserved to win at least once, and the Academy shockingly only gave him two Willis nominations to choose from. (Box Office Prophets)