The Academy’s board of governors selected four honorary Oscar winners last night, and announced the names about 11 p.m. The honorees, as you may have heard, are actress Lauren Bacall, producers John Calley and Roger Corman, and cinematographer Gordon Willis.

A few hours before the governors met, in my column describing the impending meeting, I threw out a few names of possible honorees. My list included three of the four: Bacall, Calley and Corman. 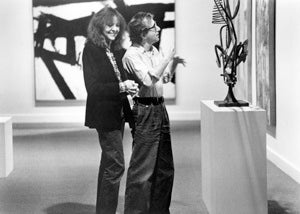 On the other hand, I also suggested five people who didn’t get chosen. And I missed Willis. (Left, that’s a scene from Woody Allen’s "Manhattan," which he shot.  Photo: AMPAS) Which means I made some good guesses, and some not-so-good guesses.

So I won’t gloat. Not much.

Anyway, here’s today’s roundup of Oscar news ‘n’ notes from around the web …

Rolling Stone’s Peter Travers does a video Fall Movie Preview. Based on seeing 40 minutes of “Avatar,” he thinks the academy will be “desperate” to give it the best picture Oscar. Of course, Mr. Travers has grown notoriously kind to movies he sees early, so you might not want to take this to the bank just yet.

The New York Times thinks Toronto is all about the women (directors) so far. But they’re not sure if that means the women in question will figure in the Oscar race.

Anne Thompson, on the other hand, thought “Creation” was painful to sit through, and found that “The Informant!” left a bad taste in her mouth. But she really liked “Jennifer’s Body,” which puts her in a distinct minority. And in a slight move toward a territory usually claimed by Jeff Wells (who, by the way, HATED “Jennifer’s Body”), Anne also pointed out that she doesn’t have enough hangers in her hotel room. (Thompson on Hollywood)

Movieline picks the six Toronto movies most likely to start a bidding war. By “bidding war,” they don’t mean a big-bucks, major-studio shootout – they mean some jockeying between the Searchlights and Focuses looking for awards bait and modest commercial potential.

Incidentally, Movieline also thinks the fact that “Antichrist” won’t get any nominations is proof that the Oscars are a big stupid joke. So there.

Pete Hammond opines that the publicity from receiving a Kennedy Center Honor on December 4 may help Robert DeNiro win his third Oscar, this one for “Everybody’s Fine,” which opens the same weekend as the Washington gala. Hammond says DeNiro is subtle and understated in the film … which, let’s face it, is not usually the way to win an Oscar. But hey, that heavyweight reputation of Bobby’s helps. (Notes on a Season)