Today’s roundup of Oscar news ‘n’ notes from around the web tries to catch up with Toronto after the festival’s first weekend. With what TheWrap’s Sharon Waxman calls “a glut of great, satisfying movies” to choose from, the first big question may be: Did everybody love “Up in the Air?”

The answer: well, yeah. Some more than others, and some a little begrudgingly, but yeah, pretty much everybody loved it. We may have a new frontrunner, which is not necessarily good news for Ivan Reitman and Paramount. 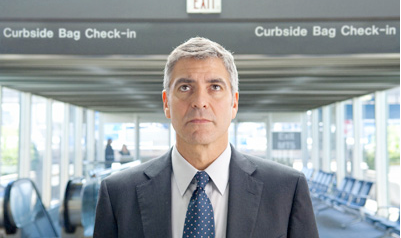 Jeff Wells, who’s found lots to love in Toronto? Loves it more than all the other things he loves. (Hollywood Elsewhere)

Tom O’Neil? He says George Clooney’s a best-actor shoo-in, and then adds that the best-picture, best-director and best-screenplay hopes for the movie depend on the “sexiness” of the writer/director. Ivan Reitman, he decides, is sexy enough. (Gold Derby)

Filmmaker.com says that the reason Toronto and Telluride festival-goers love “Up in the Air” so much is that they all go to festivals and fly around a lot and stay in hotels and identify with George Clooney’s character: “We are all a little bit that guy.” Just not the really really incredibly good looking bit.

And, seriously, there aren’t too many stars who work the press any better than Clooney. "I’d rather have a rectal examination on live TV by a fellow with cold hands than have a Facebook page…" The guy knows we eat that stuff up. (E! Online)

John Foote says “Up in the Air” might be the best American movie of the year. But then he sees “Precious” and changes his mind. (In Contention)

Which means that yes, there are other movies in Toronto. There’s Michael Moore’s “Capitalism: A Love Story,” for example.  Glieberman likes “Capitalism” quite a bit…but not unreservedly. (Entertainment Weekly)

Wells on “Capitalism”: “I think it’s brilliant and searing and the various nitpicking Moore critics can go to hell.” (Hollywood Elsewhere)

The Hollywood Reporter agrees that “A Serious Man” is "seriously funny."  Critics love to do that repetition thing.

Variety, on the other hand, says that "A Serious Man" is “the kind of picture you get to make after you’ve won an Oscar.” That’s not exactly a compliment.

A Coen Brothers aficionado looks at the spiritual message of "A Serious Man." I wonder if she’s met Wells, who says, “Only a couple of tough Jewish filmmakers could make a film this despising and contemptuous of their own."

Not to be confused with “A Serious Man” is “A Single Man.” Tom Ford has designed clothes for Gucci and posed on the cover of Vanity Fair with Kiera Knightley and Scarlett Johansson (they were naked, he wasn’t), and now he’s made a movie that won the top prize at the Venice Film Festival. The Hollywood Reporter thinks that Colin Firth is wonderful and the movie could reach beyond gay audiences, even if it does set a suicide attempt to opera.

Variety says Drew Barrymore’s “Whip It” is a gas gas gas. Not necessarily an Oscar movie, but a gas.

Dave Karger and Missy Schwartz round up the first weekend of Toronto by taking a breezy look at five movies. Their verdicts: “Up in the Air” lives up to the hype, “Creation” is enjoyable and surprisingly moving but maybe not an Oscar movie; “Capitalism: A Love Story” is one-sided but entertaining; and both “A Serious Man” and “Men Who Stare at Goats” are sort of puzzling.  (Oscar Watch)

It won’t be Oscar season without producers arguing about who gets the credit. Anne Thompson talks to the “Precious” producers that say nobody knows them. (Thompson on Hollywood)

One of the “Precious” producers that people have heard of – goes by the name of Oprah – talks about why she loves the movie and will promote the hell out of it on her show. (The AP via Yahoo! News)

Viggo Mortensen, who ought to be on that list as well, is tired. “Fried,” he says. What’ll he be like after a few more months of being a cog in Harvey Weinstein’s Oscar machine? (The New York Times)

He also says that contrary to rumor, he’s not retiring. (The Star)

Could the best-actor stealth candidate be Robert Duvall? John Foote and Kris Tapley think so. (In Contention)

Newsflash: before she became an actress and got Oscar buzz for "Bright Star," Abbie Cornish had a pet kangaroo. (L.A. Times)

Nick Hornby, who simply MUST get an adapted-screenplay nomination for “An Education,” tells the L.A. Times that screenwriting is the “most heartbreaking job in the world.”