Tonight, Michael Moore will become the first Oscar-contender to sell his new movie via the new 10 p.m. “Jay Leno Show.” For Moore’s sake, I hope his appearance isn’t preceded by another endless Leno skit like that carwash thing last night, because there/s no way I’ll make it through another one of those. 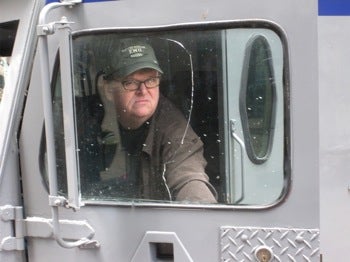 Newsweek watches Kayne West on the VMAs and decides that awards shows are dead, or at least dying. They include the Oscars in this assessment.

The New Yorker talks about art, not awards. But David Denby really liked “The Informant!” and “Bright Star.”

Jeff Wells continues to find things he loves in Toronto. Today it’s Rodrigo Garcia’s “Mother and Child,” which he dubs a “guaranteed, hands down, take it to the bank” best picture contender, and a best-actress opportunity for Annette Bening. (Hollywood Elsewhere)

Anne Thompson looks at who’s getting buzz (Robert Duvall) and what’s getting sold (not much yet, but just wait).  (Thompson on Hollywood)

At Toronto’s halfway point, the New York Times compares the market for buying and selling to last year and finds not as much going on. Of course, last year “Slumdog Millionaire” and “The Wrestler” both came to Toronto without distribution, so it’s probably unfair to expect another year like that.

“The Cove” brought enough international press to Taiji, Japan, that on September 1, the first day of the annual dolphin hunt, the fishermen didn’t dare show their faces. The trouble is, the dolphin hunt – or slaughter, the film argues – is not a one-day event. And now, two weeks after that first, widely-publicized quiet day, the killing has apparently begun again. (The Guardian)

Peter Sarsgaard tells David Poland that he was more worried about being Jewish than being British in “An Education.” His co-star Carey Mulligan goes off on a tangent, charmingly. (The Hot Blog)

Poland, meanwhile, says that for him, the charm and likeability of “Whip It” is the biggest surprise of Toronto so far. He also takes issue, albeit in a 20-word aside, with the idea that the festival has caused any change in the Oscar race. What it’s done, I’d suggest, is allow a lot more people to see movies like “Up in the Air” and “A Serious Man,” which is not insignificant when everybody starts the season guessing about things they haven’t seen. But hey, maybe that’s just a change in perception, not a change in the race. (The Hot Blog)