Pete Hammond looks at the possibility of Annette Bening and Hilary Swank facing off in the best actress category once again, just as they did in 1999 with “American Beauty” and “Boys Don’t Cry,” respectively (Swank won), and in 2004 with “Being Julia” and “Million Dollar Baby” (ditto). The prospect depends on Bening’s movie, “Mother and Child,” getting U.S. distribution and a 2009 release date … and then, of course, on the two performances actually getting nominations.  The difference between this face-off and the previous ones – and it’s a big difference – is that the past two times, Annette ‘n’ Hilary were frontrunners; this year, they’ll be hard pressed to reach that status in a category that already has Meryl Streep in “Julie and Julia,” Carey Milligan in “An Education,” Abbie Cornish in “Bright Star” and Gabourey Sidibe in “Precious,” among others. At the moment, I suspect, you’d have to give all four of those women the edge over Bening and Swank. (Notes on a Season) (Below, Swank onstage in 2005 after winning her second Oscar. Photo: HO/AMPAS) 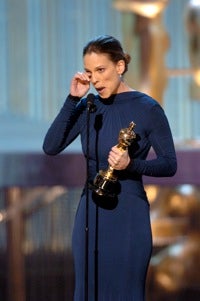 David Poland says the most noteworthy Toronto movies were so front-loaded in the schedule that the festival is essentially over. That’s not good for little movies that might get noticed if the press wasn’t so swamped by all the big movies crammed into the first few days. (The Hot Blog)

Cinematical has new posters for “Where the Wild Things Are.” Like the previous posters, they’re all pretty terrific.

Finland has chosen its submission to the foreign language category: “Letters from Father Jacob,” a low-key drama about a pardoned murderer who takes a job with a blind priest in a small rural town. It’ll be added it to yesterday’s foreign-film roundup. (The Hollywood Reporter)

France, which usually has more to choose from than any other country, picks a movie about a young hoodlum’s rise through the ranks of the Mafia, Jacques Audiard’s “A Prophet.” A Grand Prize winner at Cannes (which means it was runner-up to Germany’s entry, “The White Ribbon”), it’ll be released by Sony Pictures Classics. (Screen Daily)

In Iran, meanwhile, discussions are now underway about which film to submit. The finalists are “Penniless,” “Twenty,” “Hesitation” and “About Ely.” The decision is being made by the imaginatively-named Committee for Selecting a Film for the Academy Awards. (Payvand Iran News)

And in the Phillippines, director Brillante Mendoza would like to clarify that he has NOT been telling people that his movie “Lola” will be the country’s Oscar entrant. He also takes the path of least resistance and blames a blogger for starting the rumor.  Then he admits that he would really like his movie to be the selection. (ABS-CBN News)