As he’s considering the Time magazine review of the Coen Brothers’ “A Serious Man,” Kris Tapley decides that the film just might be the best of the year. (In Contention) 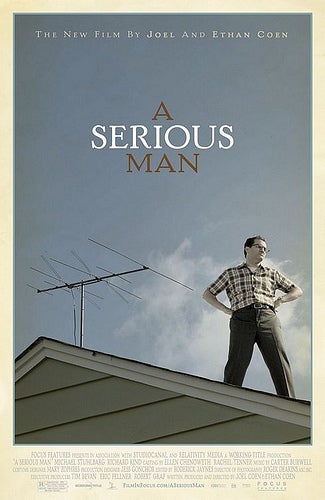 That Time review, by the way, contemplates the Coens’ end-credits disclaimer “No Jews were harmed in the making of this motion picture.” Richard Corliss isn’t so sure about that.

Jeff Wells went to Toronto and learned that “Up in the Air” is the real deal, “Capitalism: A Love Story” will get an Oscar nomination, and the Coen movie is great. He also learned that he shouldn’t leave movies early or stay up until a quarter to three. (Hollywood Elsewhere)

Nikki Finke says that the Hollywood Reporter will suspend its print edition before the end of the year (thus losing out on Oscar-ad dollars) and that Variety is going behind a paywall early next year (which would also affect its awards revenue). She claims to be sad about this. (Deadline Hollywood)

David Poland says the Variety and Reporter moves may or may not happen – but that if they happen before the Oscars, it’ll be proof of just how dire things are. He also asks a germane question vis a vis Variety’s potential move: “when’s the last time you heard anything about Howard Stern?” (The Hot Blog)

Still in business for now, the Hollywood Reporter has decided that the two big winners at Toronto are both affiliated with the same movie: George Clooney and Jason Reitman from, you guessed it, “Up in the Air.”