In today’s roundup of Oscar news ‘n’ notes from around the web, Oliver Stone gets reasonable, new film festivals give awards contenders a boost, and similar titles cause serious confusion.

Jeff Wells calls Oliver Stone’s South American political documentary “South of the Border” “perfectly reasonable.” This might be the first time those particular words have been used in connection with an Oliver Stone film. (Hollywood Elsewhere)

The Hollywood Film Festival boosts the profile of a few up ‘n’ comers just in time for awards season. No doubt some jockeying went into the choices, but the festival’s honorees are, for the most part, true and worthy contenders: actors Carey Milligan from “An Education” (if she’s not a complete best-actress lock, she damn well oughtta be), Jeremy Renner from “The Hurt Locker” (facing a typically crowded best-actor category) and Gabourey Sidibe from “Precious” (riding a powerful wave of momentum out of Toronto), “Precious” director Lee Daniels (ditto), and “(500) Days of Summer” screenwriters Scott Neustadter and Michael H. Weber (the longest shots among the honorees, though the Academy’s writers branch often goes for younger, more adventurous choices). The awards will be bestowed on October 26 in Beverly Hills. (Hollywood Film Festival)
(Jeremy Renner photo, below: Summit Entertainment) 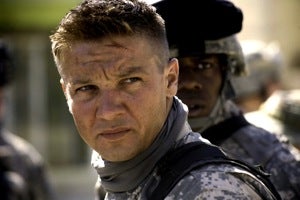 On what he concedes is a slow news day, Kris Tapley muses that maybe the Coen Brothers should change the name of “A Serious Man” to avoid confusion with “A Single Man.” Me, I’m just dreading the first time I write the name of one of those films when I really mean the other. But hey, it could be worse: between “Nine” and “9,” only one is a true best-picture contender. (In Contention)

Stop the presses: Somebody doesn’t like “Up in the Air”! That somebody, in this case, is Julian Sancton from Vanity Fair. He thinks it’s charming and comforting and sure-handed, but it fails to make its connection and it’s “gliding to a great extent on a tailwind of hype.” Take that, all you other critics.

The New York Film Festival, which opens tomorrow, is less an awards-season proving ground than some of the fests that immediately precede it. Howard Feinstein looks at the first-half lineup, which includes determinedly transgressive films (“Antichrist,” “Trash Humpers”), female-centered movies (including “Precious”), foreign films that might figure in the Oscar race (“Lebanon,” “Police, Adjective”) and documentaries (the best of which, he says, is “Sweetgrass”). (Filmmaker Magazine)