In today’s roundup of Oscar news ‘n’ notes from around the web, a rabbi weighs in on the Coen Brothers, and Michael Moore gets mixed reviews.

Just in time for Yom Kippur, the New York Times talks to the Coen Brothers about the Jewishness of "A Serious Man."  Then they talk to a rabbi about the Coens.  The rabbi thinks the guys are prophets. (Photo of Joel and Ethan Coen, below: Focus Features) 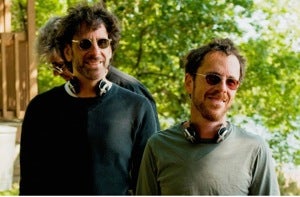 They just disagree, again: Jeff Wells thinks "Capitalism: A Love Story" might "break through," based on its opening-weekend boxoffice and the reaction from Jay Leno and an anonymous former Fox broadcaster. (Hollywood Elsewhere)  But David Poland thinks the film is coming up short and Moore knows it. (The Hot Blog)

Dave Karger kicks off a weekly Oscar Watch feature where he’ll evaluate the awards chances of the week’s openings.  This week’s verdicts: not much chance for Audrey Tatou in "Coco Before Chanel" and Clive Owen in "The Boys Are Back," but a likely doc nod for "Capitalism."

The Philippines chooses "Grandfather is Dead," a dark comedy from director Soxie Topacio, for its entry in the Oscar foreign-language film race. (Variety)