In today’s roundup of Oscar news ‘n’ notes from around the web, Leo Tolstoy jumps into the Oscar fray … but where are all the supporting actor candidates?

Pete Hammond says that the Tolstoy bio “The Last Station,” which screened to mixed reviews in Telluride and didn’t secure a distribution deal, now has a deal in place and will get a 2009 release and an Oscar push for stars Helen Mirren, Christopher Plummer, James McAvoy and Paul Giamatti. (From what I hear, Mirren and McAvoy are the best bets among that group.) He hints that Sony Classics is the responsible party. (Notes on a Season) 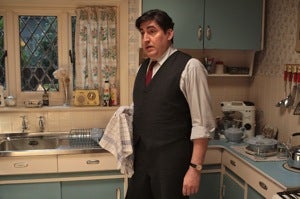 Dave Karger can’t remember a time when the supporting-actor category was so weak. The way he sees it: Christoph Waltz in “Inglorious Basterds,” Alfred Molina in “An Education” (right), Stanley Tucci in “The Lovely Bones” or “Julie & Julia,” and a whole lotta nothing. Good news for James McAvoy. (Oscar Watch) (Molina photo: Kerry Brown/Sony Pictures Classics)

Gregory Ellwood looks at the expanded best picture race, somehow finds 29 films in the running, and concludes that adding five more slots won’t work the way the Academy envisions. He also comes up with one real head-scratcher when considering the chances of “District 9”: “Arguably the last time a science fiction film was nominated for best picture was ‘Apollo 13,’” he writes.  Science fiction?  Does that mean Ellwood is one of those guys who thinks the moon landing was shot on a stage in Burbank?  (Hit Fix)

How bad did the Weinstein Company want to distribute “Precious”? The L.A. Times tells you how bad. (Company Town at latimes.com)

Vietnam says its invitation to submit a film for the Academy’s foreign-language category was lost in the mail. By the time they figured things out, they didn’t have much time and had to get special permission to submit their pick by email. They met yesterday and chose “Don’t Burn,” which is based on the wartime diary of a young doctor who was killed by U.S. forces in 1970. (Vietnam Net)

Glenn Kenny rhapsodizes about the new DVD and Blu-ray of F.W. Murnau’s “Sunrise,” the film that won one of the two best-picture awards at the first Oscar ceremony but was retroactively denied that designation when the Academy decided that the “best production” award (won by “Wings”) was a truer best-picture predecessor than the “artistic quality of production” award (won by “Sunrise”).
(The Auteurs)