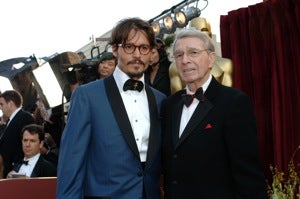 The obituary from Variety, his home base for more than 50 years.

Archerd had a long history at the Oscars: not only did he serve as the official red-carpet greeter for 47 years, but he appeared onstage a couple of times – including, lamentably, in the famously awful 12-minute opening production number to producer Allan Carr’s disastrous Oscar show in 1989. (You know, the one where Rob Lowe and Snow White sang “Proud Mary” together.) And within the Academy, he was well-known for often breaking the news about who’d been chosen to host the upcoming Oscar shows; his scoops, said an Academy insider, would anger AMPAS briefly, and then they’d forgive him and put him back out there on the red carpet.

"It's not just a four-hour job -- it's almost a whole year's job, making sure that I know about everybody who's going to be coming down the carpet that night," he told me in 2006, his last year as the Oscar greeter.  (Above, that's Archerd with Johnny Depp that same year.  Photo: HO/AMPAS)

In other news, Anne Thompson takes the eminently reasonable position that you shouldn’t put movies on your Oscar-prediction list unless you’ve seen them. So she comes up with a list that makes “Julie & Julia” a best-picture frontrunner and relegates the unseen likes of “Invictus” and “Nine” and “The Lovely Bones” to the Long Shots category. That’s the trouble with sticking to your principles. (Thompson on Hollywood)

The Toronto International Film Festival is about to begin.  The industry is heading for Canada.  The Toronto previews are coming fast and furious.

Roger Ebert, for instance, only wants to see 49 of the films playing there. He knows he can’t make it to that many. He says he admires the L.A. Times’ Kenneth Turan, who grabs an aisle seat and leaves after 15 or 20 minutes as a matter of course.  (Ebert on Film)

David Poland says it’s quiet, and he likes that. (The Hot Blog)

The L.A. Times picks 10 hot Toronto movies. Some are clear Oscar bait: “Up in the Air,” “Capitalism: A Love Story,” “The Road.” Some, seemingly not so much: “Bad Lieutenant: Port of Call New Orleans.” (The Envelope)

Or maybe I shouldn't be so flippant, because Pete Hammond looks at “Bad Lieutenant” star Nicolas Cage, watches the guy working the crowd at Telluride and heading to Toronto, and wonders if a best-actor nod isn’t a distinct possibility. (Notes on a Season)

Dave Karger gets about 150 words with Jason Reitman to talk about having Toronto's most-buzzed movie and being on “the ‘Juno’ schedule.” (Oscar Watch)

In Contention updates the Oscar foreign language race with the films that have been selected for consideration by Japan, Hong Kong, Taiwan, Hungary, Morocco, Austria and Romania.  If you're keeping score, Sri Lanka, Korea, Germany, the Netherlands and Kazakhstan have also chosen already.